I picked up Twelve Dates of Christmas thinking that it was going to be a story in just how bad dating could be and it does start out that way but... 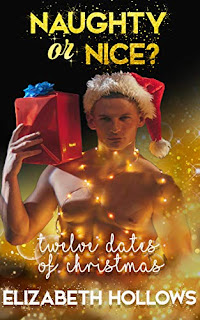 Twelve blind dates over Christmas? Chance has low expectations until he meets a gorgeous rule-breaker with a talent for dirty talk.
Christmas is fast approaching, and, like most years, Chance McKenzie is single and lonely. It makes a Christmas-themed dating service sound like a good idea. Twelve blind dates and the possibility of meeting the ‘man of his dreams’? It’s worth a shot.
The brash and flirtatious Angel Tompkins is not what Chance expects. Angel is out for a good time and doesn’t like small talk. Not only does he convince Chance to go out after their date, but he also gets Chance back to his apartment.
Angel is everything Chance never knew he wanted. When Angel asks to see more of him—in and out of the bedroom—he says yes. A two-week fling with Angel sounds like a dream come true.
But when Angel proves to be romantic and kind, Chance starts to desire more than just casual sex and the occasional date. They’re both on a dating service with at least twelve other men. What are the odds that Angel would ever want more than some fun?
Heather's Review:
There were just a few surprises in the Twelve Dates of Christmas and I won't spoil them for you but it was those surprises, the banter and the pacing that made this a great read for me.  This was a quick and easy read for me, with just a sprinkle of angst, a dash of sweet and some heat thrown in to bring it all together...
This book gave me the holiday feels with some instant attraction, some ice skating, some relationship risks and a holiday HEA!
5 Stars Christmas Heather holiday steamy