To Melt A Frozen Heart (Rossingly Book 3.5) by Fearne Hill

on December 14, 2021
It's fun when we can bring you more than one perspective on a book - and today Sheena and I both review To Melt a Frozen Heart!  Sheena from the perspective of someone who has followed the series, and me who is joining the Rossingley world for the first time...
From the Blurb: 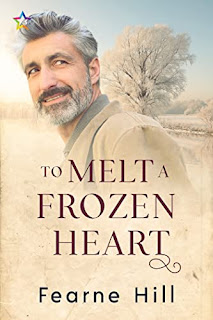 Freddie Duchamps-Avery has only one desire this Christmas: to ask his beloved Reuben to marry him. However, with his needy father moping around, finding the perfect, romantic moment to propose is proving tricky.
The Rt Hon. Charles Duchamps-Avery is a successful politician, a hopeless father, and a miserable divorcé. Facing the prospect of Christmas alone in London, he accepts his son Freddie’s generous invitation to join the gang at Rossingley. Yet, being surrounded by happy couples only serves to remind of his past mistakes and a looming, lonely old age.
If only a handsome, enigmatic stranger would appear and distract him…
Sheena's Review:
It's official. The Rossingley series is my favourite of this year. (To be fair, I probably knew that going in to this one). I've loved every single minute I've spent on the Rossingley books, and this is really the icing on a very nice cake. It's great to see the Rossingley gang again, and while Lucien is undoubtedly still my favourite, I love all the Rossingley boys.

This however, is the story of Freddie's dad who we have seen fleetingly in the other books. This time round we get to see a whole lot more of him and while in the beginning he was not the nicest person, this truly was his time to shine. I grew to really like Charles, and my gosh I really felt bad for him. I really wanted him to get his HEA and while it didn't end really with that, I think in the end things will work out for him. I never saw his love interest coming though, but I absolutely loved it, and how easy it all was with them.

This is really two stories wrapped up into one festive bundle though, and I won't spoil the other, suffice to say it made me happy though.


I'm selfish enough to want more Rossingley, but if this truly the final icing on that cake then I'll take it. And just re-read the entire series when I need my Duchamps-Avery fix.
Rating: 5 Stars
Heather's Review:
This was the first Fearne Hill book I picked up... I watched the reviews from my fellow reviewers come in for book 3 and was intrigued by the idea of the Rossingley stories,  but my TBR has gotten away from me, so I haven't been able to circle back to the start yet.  Since I always appreciate reviews from people who start a series in the middle or end, I thought I'd be that person...
First off, knowing that there are three books in the series preceding this one scared me a little, but I shouldn't have been worried at all... Fearne Hill was able to give me enough history and depth for the side characters that I felt like I've known them all my life!
I was a little thrown by the fact that To Melt a Frozen Heart is dual POV - not between an MC couple, but between Freddie and his father, Charles... I have to admit that this took some getting used to, but it was an interesting take and once I caught on, added to, rather than detracted from the story.
Even in the short story format, I was able to build a picture of Rossingley and the surrounding environs and I truly enjoyed my visit!  I am definitely going to go back and read the first three books as soon as I can find time for pleasure reading!
Rating: 5 Stars
Side note:
If you haven't started the series yet, and are intrigued to find out more, come back on Thursday when we feature To Hold A Hidden Pearl as our Throwback Thursday post with an exclusive excerpt of the story that began the saga!