#ThrowbackThursday: To Hold A Hidden Pearl (Rossingley #1) by Fearne Hill

I told you when we posted the review of  To Melt A Frozen Heart  the fourth (and final) Rossingley book (#3.5) earlier this week that we'd have a chance to take you right back to the start... To Hold a Hidden Pearl began the 3.5 book Rossingley Oddessy just over 10 months ago and if you haven't read it yet - here's the blurb and an excerpt to whet your appetite: 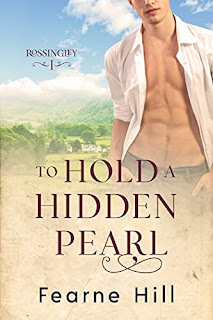 A grumpy aristocrat, a closeted doctor, a vast country estate, and a priceless butter dish – welcome to Rossingley!

Dr Jay Sorrentino is getting married in ten days’ time to the girl of his dreams. So what the hell is he doing in a gay London club with a stupidly handsome stranger?

As if calling off the wedding and alienating friends and family isn’t enough, Jay also has to contend with starting a new job in a new hospital. The last thing he needs is for his prickly supervisor to recognise him.

Dr Lucien Avery, the unexpected and reluctant heir to the vast Rossingley estate, is difficult. Reclusive and miserable, he hates packed lunches, bland clothing choices, most of his colleagues, and supervising junior doctors. That is, until the delectable Dr Sorrentino turns up on his doorstep.

To Hold A Hidden Pearl (Rossingley #1) is an M/M contemporary romance centred around Rossingley, a fictional country house and estate in southern England. The first in the series, it can be read as a standalone.

I don’t do nightclubs anymore. It’s not an age thing. Sure, I’m thirty-four, but there are plenty of men and women older than me in here seemingly having a blast. It’s…it’s just that I hoped I’d never need to, I suppose. I think I had this ridiculous notion I’d be happily settled with a great job, an even better loving partner, and a comfortable home. I have the job, and I certainly have the home, not that I particularly wanted it. But the loving partner? Not so much. To be fair, though, I’m quite difficult to love.

So here I am, propping up the wall in Spangles, a club I haven’t visited in years, watching my pissed former work colleagues, Sam and Louis, make complete arses of themselves on the dancefloor.

There’s a whole gang of us here. I don’t know any of the others, and I don’t really want to become better acquainted with them either, but Sam has been begging me to come up to London for months and months. He’s been a decent friend since the accident, as much as I’ve let him, and joining him for his boyfriend Louis’s thirtieth birthday is the least I can do to show my appreciation. So I’ve downed a few colourful cocktails, which seem to have had no effect on my mood whatsoever, put on my glad rags  , done my eyes, and pretended to be the sexy guy I used to be before my former existence was comprehensively annihilated. And tomorrow, when it’s thankfully all over  , I’ll whizz back down the M4 to Allenmouth  , and having seen how absolutely spiffily I’m coping, they’ll hopefully leave me alone for a while. I deserve an Oscar for tonight’s performance, but I’m starting to flag. Another ten minutes of hugging the wall and my Campari and soda, and I’ll be on my way.

An enormously tall, Italian stallion kind of guy gives me a blatant once over, and my eyes skirt past him. Thanks, but no thanks. Curly black hair, eyes like pools of melted chocolate, bulging shoulder muscles, and a broad chest threatening to break out of his tight white T-shirt. As if at any minute, the T-shirt might rip open and his skin turn an ugly shade of green. As he is, with T-shirt intact, he’s what Americans refer to as a jock. Or an especially buff Latino T-Bird  . But I’m no simpering Pink Lady. He’s absolutely not my bag at all.

My gaze settles on a little cutie chatting to his friends near the bar. Much more like it, exactly my type of guy. Perfect tight arse in the skinniest of black jeans, and he’s demonstrating the grace of a ballet dancer as he reaches upwards onto his toes to speak into a friend’s ear. Slight of build, and floppy, dirty blond hair with pink frosted tips. Sensing my interest, he shyly smiles at me, and I look away. We all know the rules to this game, and a few seconds later, I glance back at him. He returns the look at precisely the moment that a protective, possessive arm comes to rest across his narrow shoulders, and the ruggedly handsome owner of that arm plants an adoring kiss on his cheek. With a regretful shrug, the cute guy turns to his companion and is pulled into a loving hug. A keeper for sure, only not my keeper unfortunately. Oh well, c’est la vie.

Gloria Gaynor is belting out that she is what she is at the top of her lungs. Most definitely my cue to leave. I finish my drink and head to where I last saw Sam and Louis. With a bit of luck, they’ll be so engrossed in each other they’ll let me slip out unnoticed to find a taxi to take me home. As I begin to push through groups of sweaty clubbers, the Italian stallion guy blocks my path. And I mean blocks—he’s broad and beefy. He’s giving me an anxious once over through thick black lashes, and his liquid-brown eyes are strangely as skittish as a colt’s. I make to squeeze by. But his big hand reaches around, catching me unawares, settles firmly around my wrist, and I’m tugged towards a dark corner of the club. Granted, it’s an unconventional hook-up technique, but I’m pissed enough and curious enough to go with it—perhaps in the dim light he’s mistaken me for my cousin Freddie; it wouldn’t be the first time. We both have rather striking features.

So it seems that now he’s got me here, he’s not quite sure what it is he wants. He hovers in front of me, one hand resting lightly at my hip, and I can’t tell if he’s very nervous or very drunk. I’m happy to wait; I’ve got nothing better to do. Anyway, I’m mildly intrigued as I have a feeling that, like me, he doesn’t really belong. He licks his lips once—yes, definitely nervous—and it draws attention to his fine mouth, a full cupids bow, now glistening wetly. The sort of generous wide mouth made for laughing. Or cock sucking. I’m focusing on those lips now because the background thump of Ms Gaynor makes audible speech nigh on impossible.

Gosh, we must be acquainted after all, as this is one of my all-time favourite questions.

I contemplate replying with a sarcastic, “Yes, if you can find it, darling” because frankly, it’s most likely shrivelled up and died somewhere. But instead, I nod coolly and find myself mouthing, Be my guest, accompanied by a faintly ridiculous sweeping gesture of my arm as if inviting him in for afternoon tea. And that mouth is quite enticing, even if it is attached to a man built like Tarzan. Beautiful skin, too, a rich natural olive.

I don’t know the extent of his lipreading skills, but I think he gets the message. Still looks nervous as hell though. I’d go so far as to say bloody terrified. I’ve no idea why, as he’s the one leading on this, and it’s not like my cock is going to bite back. If he’s afraid we’ll be spotted and turfed out, then he need not be. This corner of Spangles might as well have a sign above it advertising ‘sloppy blow jobs here,’ judging by the stickiness of the carpet and the blatant activities of the couples nearby. However, whatever internal battle he’s fighting, his desire to suck on me bizarrely wins out, and he sinks to his knees rather gracefully for such a big bloke.

Fearne Hill lives deep in the southern British countryside with varying numbers of hens, a few tortoises and a beautiful cocker spaniel.

When she is not overseeing her small menagerie, she enjoys writing contemporary romantic fiction. And when she is not doing either of those things, she is working as an anaesthesiologist.

Are you ready to dive into the Rossingley Series?   To Hold a Hidden Pearl is ready and waiting to be read... as are the rest of the series!