With all the Christmas books out, I thought I'd highlight something a little different on today's Throwback Thursday - Dan's Hauntastic Haunts Investigates: Goodman Dairy by Alex Silver... 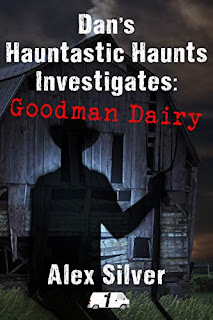 When ghosts reach across the veil, Daniel Collins is there to tell their stories.
Dan is a vlogging ghost hunter. He has devoted his life to documenting paranormal activity. In his converted van, he travels around the country exploring haunted sites. He loves the thrill of filming restless spirits.
Chad Brewer, skeptic, works for an insurance company. He doesn’t believe in ghosts, but watching Dan’s vlog is his guilty pleasure. The cute vlogger is accident prone. He has Chad’s work extension on speed-dial. The two talk whenever Dan gets hurt during an investigation, a frequent occurrence.
When Chad loses his job for approving too many claims, Dan offers him a position as his personal assistant. The pair sets out to investigate a haunted dairy barn for the vlog’s next video series. The catch is that they must live and work together in Dan’s tiny traveling home.
As the paranormal activity at the haunted dairy ramps up, so does the romantic tension between the two men. Can the love between a skeptic and a social media sensation conquer a vengeful ghost?
Dan's Hauntastic Haunts Investigates: Goodman Dairy is a paranormal MM romance between a gay vlogger and his trans personal assistant. Buckle up for a hauntastic good time.
Excerpt:

Dan Collins, ghost hunter, was trending on social media. This was it. The moment I’d been living for since I started my vlog channel. My moment to shine.

Too bad that instead of incontrovertible proof that ghosts walk among us, I’d become an overnight vlogging sensation because I fell. Through—not down—the rotted out steps of the old deserted building I was investigating. Over a quarter of a million views and everyone was yucking it up because I almost broke my neck.

At least I had good insurance, the ambulance trip and treatment for my broken leg were both covered. And my phone survived the fall, even if some of my ghost hunting equipment did not.

The footage captured the characteristic lens flare of a ghost in the corner of the frame right before I took my plunge back to the ground floor.

No one cared about that. No, all they saw was my expression of shocked horror as the ground gave way under me. My arms windmilling, my expensive gear smashing down the stairs and then I fell out of frame.

People posted reaction videos to my video. Kids reenacted my facial expression at the moment the ghost touched me. None of them seemed to notice the evidence of a spirit pushing me onto the rotten stairs. Only my most devoted subscribers pointed out the other presence in the frame.

The social media frenzy took off with me stuck in a hospital bed with nothing but my phone for company. Stacy quit once it was clear I would not die. She claimed she hadn’t signed on to risk her neck as my personal assistant. In all honesty, I couldn’t blame her. This wasn’t the first time I’d ended up with injuries while capturing footage.

It wouldn’t be the last time. Not that it was my fault. It was just that hauntings drove the living away. So they showed up in places that were falling apart.

By the time they generated enough buzz as urban legends to reach my ears and became accessible to the public, haunted places got rundown.

It also wasn’t the first time I’d lost an assistant to my injury prone nature. Stacy had lasted for almost a year. Zack, the assistant before her, quit after a couple months. Others had come and gone too. Martha, my first hire, quit after our first haunting.

Martha preceded me into the building to film my entrance. Her first step into a spider web had resulted in her screaming at coming face to face with the web’s occupant and then running back out of the building. Martha hadn’t been my best hiring decision ever, but I was still new to figuring out the whole employer thing.

My vlog, which I started after high school, took off enough to consider supporting myself with it when I was a community college freshman. I developed a loyal core of followers. And I put out quality content.

My brand started as more of a ‘dare me to stay overnight in the spookiest spots on earth’ gimmick. But after my experiences road tripping to various spooky spots all around the Northeastern US, I’d started to believe in ghosts. How could I doubt, after all the weird stuff that happened?

My subscribers agreed. Ghosts were real, and we were on a quest to prove it. I started getting gifts of ghost hunting gear and researching it more myself.

A good quarter of my webisodes were just talking about the ways we could measure paranormal activity. On my site fans discussed what would constitute incontrovertible proof of a haunting these days. In an age with digital media being what it was, skeptics could refute any evidence we found.

The other half of my video archives were the hauntings. Like the Old Miller House. Where I fell.

I sighed and refreshed my landing page. The view counts had ticked past three hundred thousand now.

I got an email notification. Since my video took off, my fanmail had increased on a massive scale. I considered ignoring it. I used the term ‘fan’ in a loose sense, most of the people writing to me after the accident thought I was a joke.

But the preview in the notification for this message showed it was from my insurance carrier. They had denied my latest claim. Not again, ugh.

Stacy said it wasn’t normal. She joked that I should add a channel to my vlog rating the nation’s ERs since I spent so much time in them. Setting bones and getting stitches.

I suspected she was right about the not normal part. But my job could be dangerous. It wasn’t like haunted sites were famous for their impeccable maintenance. I dialed Chad’s direct line. He picked up on the third ring with his usual professional greeting.

“Chorus Insurance, Chad speaking, how may I help you this evening?”

There was a beat of silence.

Chad sighed into the phone. Well, that was a break from the cool professionalism, progress on my campaign to wear him down from a call center bot.

“What can I do for you this time, Mr. Collins?”

“You can start by calling me Daniel, come on, Chad, we’re best buds at this point.”

I imagined Chad pinching the bridge of his nose. It was a gesture my dad used to do a lot with me when I strained his patience, so that was where the mental image came from.

Not that I’d ever seen Chad to compare him to my father, but from his voice I imagined he was a hot older guy. Maybe a bit of a nerdy professor vibe going. Salt and pepper hair, clean shaven. A person who wore chinos and pressed dress shirts and thought hipsters ate too much avocado toast. A real stickler for the rules. Real dad-like.

“Mr. Collins, can I just have the claim number you are calling about?”

“See? This is the reason I always turn to you in my hour of need, Chad, you’re just so efficient.” I rattled off the claim number from the email.

“It says here that your claim got rejected because you are being dropped as a Chorus Insurance client.”

“That can’t be right, I always pay my premiums on time.” I did too. The first thing I paid for each month was my insurance. I’d used it enough that I wasn’t about to mess around with it getting canceled.

“The note says you are a high liability patient and Chorus Insurance can no longer meet your healthcare needs.”

“Chad, buddy, come on. There must be some way you can help me.”

“I can ask my manager about getting you signed up for a high risk policy.” Chad sounded doubtful. “The premiums are higher. You would have a larger deductible and the coverage isn’t as comprehensive as your current policy, but it would at least keep you covered.”

“Let me speak to my supervisor and get back to you. And I’ll resubmit the current claim, since your old policy still covered you when it came through. As you said, you do always pay your premiums on time.”

“That would be great, thanks. I knew I could count on you!”

Chad gave me a canned response to the effect that I should have a great day and hung up on me.

A few hours later an email arrived saying they had approved the claim. Once again, I thanked my lucky stars that Zack had taken down Chad’s phone extension when we were dealing with the claims for my first concussion last year.

A direct line to Chad cut my call wait times down to nothing. He might sound like a crusty old guy, but he always came through for me. Even when I called on a Saturday evening.

Are you ready to read the rest? Dan's Hauntastic Haunts Investigates: Goodman Dairy is available on Amazon and Kindle Unlimited!'

Alex Silver (he/them) grew up mostly in Northern Maine and is currently living in Canada with a spouse, two kids, and two birds. Alex is a trans guy who started writing fiction as a child and never stopped.