The Night Bartender by Alexa Piper

A witch meets a banshee in a bar, steamy times ensue while they investigate what happened to a missing girl.

From The Night Bartender Blurb: 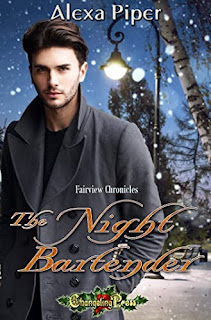 Aaron has come to Fairview to find his ex’s teenage sister, who went missing in the city. As a witch both rich and powerful, Aaron follows a trail that leads him to a bar frequented by supernaturals and to a bartender who attracts Aaron's attention -- and not just because the bartender is keeping something from Aaron. When Aaron runs out of leads, he follows the mysterious and pretty bartender, and the next thing Aaron knows, he's foiling an attempted abduction.
Ilya has built a quiet life in Fairview mixing drinks and flying under the radar. He is a banshee, and the psychic ability and mild telepathy that comes with that makes Ilya a sought-after commodity. That carefully constructed life Ilya built for himself breaks into a thousand pieces when a handsome witch starts asking questions and becomes Ilya’s rescuer mere hours after they meet.
The witch, Aaron, vows to protect Ilya and to keep his secret. Now Ilya has to decide whether he will give Aaron his trust and risk a lonely but safe life as a night bartender in a wintry city in which people disappear only to then turn up murdered.

The Night Bartender is a fast paced with plenty of steam.  We don't have to wait long for Ilya and Aaron to get together which was great because I loved the banter between them.

Aaron for such a powerful witch with a big ego, was actually pretty sweet and he falls hard for Ilya. He reminded me of a puppy a lot and was easy to like. His power is pretty cool. I'd have liked a little more background in him, like how old he and Illya are for instance. A couple of questions are left unanswered.

I adored Ilya's character, the way he doesn't show emotion much but is a secret sweetheart inside. The double edged sword of his abilities was interesting.

Although there's mention of an ex, there is no ex drama.

There are a few side characters that I'd like to get to know and I hope that this isn't the end for Ilya and Aaron's story.   Although The Night Bartender is part of a series, I was able to read it standalone and I don't think I missed out on the main story.