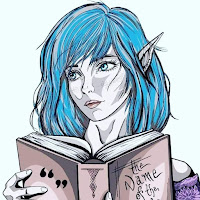 I'd like to say that I spent Christmas interviewing authors, but tbh KD Ellis' interview was another one that got lost in the abyss of my lack of organization in the last week of November when I was hyper-focused on the Facebook event...
I'm so glad they kept a copy of the interview and re-shared it with me... so that I can share it with you!
Indie or Traditionally published? - Tell us how this works for you...

I’m currently with a traditional publisher—Pride Publishing, an imprint of Totally Entwined Publishing Group. I chose to publish traditionally this time around, (I have a book published indie under a different penname with a co-writer) because of the amount of marketing, etc. that goes into being an indie writer. I admire indie writers so much, they do way more than people see! I work two day jobs, and simply cannot commit that much time and resources, and upfront cash, to have a successful launch. Working with a publisher freed up more time for writing and editing.

Plot or Pants? Do you pre-plot your books, use an outline, fly by the seat of your pants or some combination of things? How do you keep track of characters in a series? Do you keep a journal of your characters statistics, such as hair and eye color, relatives, hometown, etc.

A bit of both! I generally have a loose idea of where I want the plot to go, and what the internal struggle of the characters will be, before I start writing, but then I flesh out the details and subplots as I go. Generally, I end up with a rough first draft (that is almost more like an outline in itself), and then go back in and add the details. I try to keep track of characters descriptions, but always ALWAYS have to go back and do re-reads to double check, because invariably I forget a small detail that turns out vitally important later.

My first published gay romance was the second one I wrote. (Ironically, my first written is the second book in the series, funny how that turned out!) Teddy’s Truth features a trans man in debt to a cartel and his latino ex-boyfriend, now undercover with the FBI. It takes place in two timelines, one pre-transition at the start of their early relationship, and one four years later, after everything has hit the fan.

This book means so very much to me, because I put so very much of myself into Teddy. Teddy is struggling with a single mother with mental health issues, an abusive childhood, gender dysphoria. All issues that I have suffered from as well, if not under exactly the same circumstances. Unlike Teddy, I didn’t recognize, let alone accept, my internal struggle with gender until much later in my life. While much of the plot of Teddy’s Truth is fiction, many of the feelings Teddy evokes come from my own personal life.

… and then your most recent one.

My most recent release was Shiloh’s Secret, the first MM romance I put on paper. Shiloh is a trust fund brat with daddy issues and a dark past. When his father, the millionaire CEO of Beckett industries, starts receiving letters from a stalker threatening his son, he hires a bodyguard. And then another, and another, when his son keeps giving them the slip. Finally, he hires Gage, former Army-Ranger-turned-bodyguard with Eagle Security.

I struggled with how to make this story believable without impacting the emotions I wanted to evoke. I’ve always had a bit of concern about employer/employee relationships, and the inherent power difference involved. While I enjoy reading them, it didn’t work for Shiloh, with his past. It was like putting together a puzzle, building the relationship between the pair organically while also tiptoeing around this issue.


Do you write full time or part-time?

Part time, though the goal is to someday be able to make it my primary job. Unfortunately, bills must be paid!

Only four? That’s a difficult question…(And depends entirely on the type of party!) Since this is a blog on writing, I’ll keep it clean!

I would have to say Lucy Lennox, Onley James, Lynn van Dorn and Luna David. (And then feel immediate guilt that I’m leaving out all of my OTHER favorites, like Isla Olsen, EM Denning, Kate Hawthorne…I could go on…). And I would serve lemon-and-herb chicken breast with roasted garlic red potatoes and asparagus (My favorite meal) while I pick their brains on writing!

The hardest part for me is the discourse going around about cishet women writing MM. I don’t identify as a woman, and I’m definitely not cishet…but looking at me, it’s not immediately obvious. I can’t afford surgery to have the body I want, and when it comes to gender expression, I fluctuate between masc and femme from one day to the next. Every time I write, I fear that someone is going to say I’m not masc enough to write MM. I push through, but it’s an ingrained fear I deal with constantly.

This happens ALL the time. I’m normally working on 3-4 projects at a time, and if I hit writer’s block in the primary one (The Out in Austin series), I’ll switch over to one of them for a bit. I’ve been drafting an epic fantasy novel for about 15 years that I will never finish but is fun to play with, and I’m also currently working on a dystopian fantasy series with my roommate under a different penname, as well as a shifter/vampire Daddy kink paranormal romance…thing? That is laying at around 45k words at the moment. Plenty to choose from!

Also, I drink lots of coffee!