I think I've caught a case of the holidays... my kids are off school and I honestly can't tell you which way is up or what day it is... but I have an amazing Teaser to share with you for a box set that comes out on Christmas Eve....Fire & Brimstone Scrolls: The Complete Series Box Set  by Nikole Knight 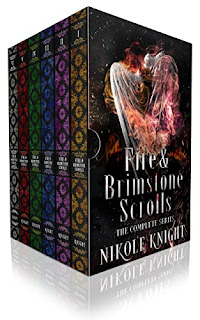