on December 12, 2021
Steal the Wind (Godstone Saga - Book 1) by Jocelynn Drake is an Epic Fantasy with a modern twist!
From the blurb: 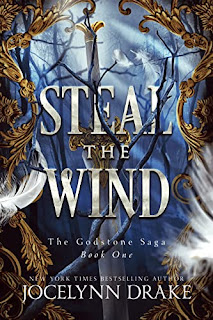 Everything Caelan knows about his world is a lie.
A war is brewing. As the crown prince of Erya, it’s only natural that Caelan is sent on a secret diplomatic mission to support one of the kingdom’s allies. With his advisor, his bodyguard, and his best friend as traveling companions, what could go wrong?
Everything.
Everything goes wrong.
Now they are on the run, dodging assassins, setting secret meetings, and even making deals with a sleeping god.
So, this is probably a really bad time to cave to feelings he’s been fighting for his best friend. But Drayce has owned his heart for more years than he can count and if he’s going to die, shouldn’t he have just one kiss?
The fate of the world is on the line, and only Caelan holds the power to save them all.
Steal the Wind is the first book in the six-book Godstone Saga fantasy series and is not a standalone. The story contains explosions, secrets, cranky gods, hidden romance, a prince on the run, a possessive ex-boyfriend, magic, and lots of delicious angst.
Miki J's Review:
When I originally read the blurb, I assumed this was a fantasy novel (different worlds etc - medieval times). Not so - yes, different worlds, royalty, political wrangling but all set amongst modern times (mobiles, cars, etc). It did throw me out a bit but as I kept reading, it all flowed seamlessly.
Steal the Wind is told from 4 POV's but wasn't hard to follow. This first book takes its time to get us set up in this new world and who all the characters are/backgrounds etc. And then the adventure begins - well written, some angst, action, funny moments and steamy times. It does end on a cliffhanger but we don't have to wait too long for book # 2 !!
Rating: 4 Stars
(Bloggy owner note: Miki J. submitted this review before the second book's review, but it got lost in the netherworld of drafts... so not only can you read Steal the Wind, but Breath of Life, the second book in the series is also out!
4 Stars angst Fantasy Miki J Series