on December 11, 2021
Both Jacquie and Laora agree about a lot in their reviews of Solstice Surprise... including that this makes a wonderful epilogue to Catch a Tiger by the Tail
From the Blurb: 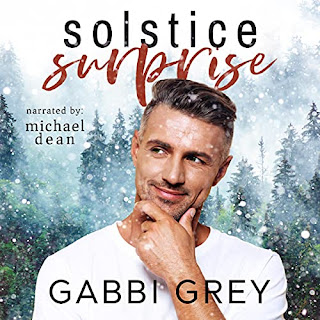 A blizzard, an urgent plea, a desperate journey, and the most important moment of their lives.
Action movie star Peter Erickson is spending the Christmas holidays ensconced with his in-laws and his new husband. In the wilds of Northern British Columbia, they are as far away from the bustle of the city as they can get.
Thomas Walsh and his famous husband are deeply in love. Although he prefers the intimacy of their city house, he's come home to face the reason he left 10 years ago, and to finally tell his parents the truth. A desperate phone call has the couple scrambling. Will they get back to Vancouver in the middle of a snowstorm in time for their solstice surprise?
Jacquie's Review:

Although Solstice Surprise is supposed to be a standalone, I think it for me it was more of a sequel or indeed and extended epilogue for Catch a Tiger by the Tail.

Like book 1 it covers a few days in detail and then gives us a glimpse at their future lives.

It was great to check in with Thomas and Peter again but the surprise subplot felt a little out of place. To me, something that big would have been at least hinted about since it was so close.

It was cute though and I loved the additional cast like Sarah and Codi.

The narration was good but there were patches where the voices weren't distinguishable from each other or sounded different. The narrator managed to add some drama into the story

I listened to Solstice Surprise before Catch a Tiger by the Tail and of course had to re-listen after that book. I liked this book the first time around when I read it and enjoyed as much when listening to it these two times. I enjoyed the fast pace of the story. And the fact that Thomas got his closure at his hometown with his parents.

This men found their HEA in the earlier book, but find even more happiness in this one. For the book

The narration was good, but for me it did not add a lot to the original book. It was nice to listen to though.