Sometimes the best hurt/comfort books come from a place where both characters have past hurts that need to heal and that's what happens in Smokescreen by Elouise East: 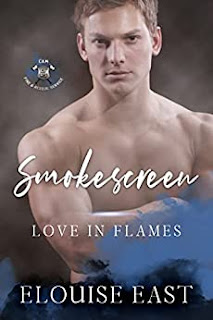 An MM romance about trust, friendship and love.
“You’re a troublemaker. You’re worthless.”
The voice of his brother was just as vivid now as it was twenty years ago, but Jason is content with his best friend, roommates and firefighting crew. It helps that he has an engine load full of humour in his arsenal. What better way to hide his feelings? He's going to need every ounce of that humour when he has to stand semi-naked in front of a camera for a charity firefighter calendar.
"Is that a camera in your pocket or are you happy to see me?"
Harry tries to push aside the voice of a certain firefighter, but after spending several hours with the man, he finds his walls splintering. Jason's job is a problem for him, and he doesn't see a way around it. A chance meeting in a bar allows them to take the one night they both want, but that encounter sets off a chain of events neither could predict.
What happens when Jason's memories and Harry's anxiety reaches their limit?
My review:
More often than not, the biggest clown is the person who's hurting the most and that's what we see in Smokescreen by Elouise East... both Jason and Harry have traumatic pasts that heavily influence their presents and futures and it was nice to see a book that offered both characters the chance to grow and heal from their past hurts and also learn to accept love from those around them...
Once again Elouise breaths life into both the characters and the setting.  All of the side characters bring something to the flavour of the story - both the ones that have partners and the ones whose stories are yet to be written.  I enjoyed this story and was somewhat surprised by the lack of angst, given the amount of hurt that needed to be overcome for these men to find their HEAs but not in a bad way.  If you love a good firefighter hurt/comfort redemption story than look no further than Smokescreen!
Smokescreen is the second in the series but can be read standalone.
Triggers for past abuse and bullying discussed in the story.
Rating: 5 Stars
5 Stars Contemporary Firefighter Hurt/Comfort Series steamy