Playing At Home by Jax Calder

Falling for the kids' nanny is sucg a cliche.  What happens when you're rugby royalty and the son of a legend, and your new nanny is a 'manny'?

Blurb from Playing At Home: 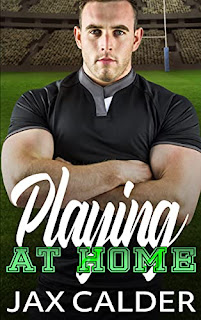 Falling for your kids' nanny? Never a good idea.

Jacob Browne comes from rugby royalty but try as he might, he’s never been the same heroic idol his father was on the rugby field. And now he’s failed off the field with the breakdown of his relationship to New Zealand’s favorite ‘It Girl’ Matilda Neilson. When Matilda hires a male nanny, it feels like the ultimate kick in the guts that another guy gets to spend more time with his kids than he does.

Austin’s freshly back from London and his new job looks great. Matilda is determined to be his new BFF and the kids are awesome, although he gets the feeling that his other boss, the glowering rugby player, isn’t that excited by him. But that’s okay, he’ll win him around. What he won’t do is crush on his gorgeous straight boss, because that’s the pathway to a whole lot of hurt, as he knows from the scorch marks still burned into his heart. Unfortunately, that resolution doesn’t allow for when he gets to know the real Jacob. From princess parties, Lego wars, nights spent talking about everything and anything, Austin’s falling for him hard. And when Jacob is revealed to be not as straight as previously assumed, all bets are off.

In sports, playing at home is supposed to be an advantage. But sometimes when things get too scorching, it can threaten to burn the whole house down.

This is a relatively new author, I understand, which is hard to believe as this is just so well written. This is the second in a series, I loved the first so I was really looking forward to this. I wasn't sure if it would measure up to the first but it really does. Jacob and Austin are really well formed characters, and the side characters (especially Jacob's kids) are great too.

Austin hasn't exactly had an easy life so far, he only has his Gran left as his 'real' family, and Jacob is almost rugby 'royalty'. I loved the easy relationship they had though, the slow coming together as friends, best friends and then Jacob's eventual realisation he felt more for Austin than just friends. It's a great story about bisexual awakening, with some drama and angst but Playing At Home's ultimately one of the more satisfying books I've read this year.

I loved seeing Tyler and Aiden from the first book again too, and I do look forward to the next in the series. I'm with this for the duration if it's near as good as the first two.

Jax Calder had me once again at Rugby... yum!  Jax takese a classic falling for the Manny trope and brings new twists and turns to it... Even when the trope is a walking cliche, the story feels fresh and exciting.  How can you not love Austin and Jacob as characters - they both come from places of hurt and need, and they bond in the best way possible - over the kids, beer and friendship!

I love how this book takes place somewhat concurrently with Jax Calder's first release, Playing Offside, and you get to see progression in both these characters and new elements of Tyler and Aiden's relationship as well as the rest of the team!

When I rave about someone's debut novel, I often brace myself for the second book to be a little less exciting, but honestly, I think I like the dynamic and characters of Playing At Home even more than Playing Offside...   I do recommend reading them in order because they do overlap, but if you need to dive into Playing At Home right away, you'll pick up on all the major story arcs and clues without an issue.