My Husband's Boyfriend by JS Grey

My Husband's Boyfriend by JS Grey is a steamy menage with an older committed couple.  Check out Jacquie's Review! 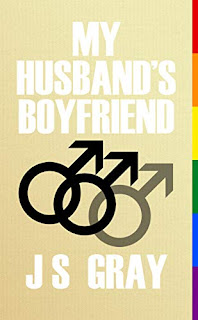 Rich and Kieran are just like any other married couple. They have a four year old son, they’ve been together way too long to remember and all of the romance has gone from their relationship. Desperate to rekindle their flame, the couple will try anything. After one or two bad experiences, they invite Gus into their bedroom and their all of their wildest desires begin to come true. Jealousy creeps in, and Kieran worries about losing his husband. Gus may have come to ‘fix’ their marriage, but how easy will it be for them to continue without him? My Husband’s Boyfriend is a story of intimacy, sexual exploration and love.
Jacquie's Review

My Husband's Boyfriend is a slower burn, steamy tale of exploration in a long term committed relationship.

With the omnipresent narration, though it focuses more on Rich, we get the feelings of all parties. I do think that just single, first person would have suited better, switching pov's maybe for a deeper look. There were times where I didn't quite feel connected to the characters though I could sympathise with both Rich and Kieran. The title suggests more of a relationship with Gus than there actually is, though the potential was there

The ending was sweet and not a direction I foresaw which made it better.