Lust and Other Drugs by TJ Nichols

"Lust would've been simple.  This was complicated."

From the Lust and Other Drugs Blurb: 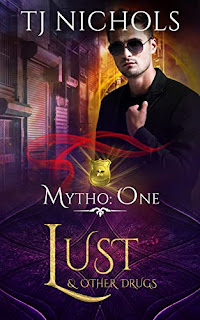 Police officer Jordan and dragon shifter Edra might have to work together, but they don’t trust each other—even if sparks do fly between them.
If anyone finds out Jordan’s a mytho sympathizer, it could kill his career. No one can know that he frequents the satyr dens and uses the drug Bliss. A dead satyr might not get much attention, but two dead humans who appeared to overdose on Bliss? That shouldn’t even be possible.
And it might not be an accident.
Edra, the Mythological Services Liaison, has been covering up mytho crimes to protect the community’s reputation. With a mayoral election looming, the last thing his people need is a scandal.
To get a murderer off the streets, Jordan and Edra will be spending a lot of time together, and it won’t be easy to keep up with their deceptions… or to keep resisting each other.
~~~
Lust and other Drugs is the urban fantasy romance you’ve been waiting for; rich with creative and engaging world building, complicated characters, and an exploration of the intricacies of dragon mating rituals, Nichols gives a captivating and sensual touch to paranormal mm romance.
Book 1 in the gay urban fantasy series that follows Jordan and Edra as they solve crime and figure out how to improve Mytho and human relations. For readers who like dragon shifters and forbidden romance.
Miki J's Review:

I love the back story. Humans stuff up, another world blends into ours and lo & behold, fantasy creatures/myths/gods are real. And the humans can't handle it.....integration, who'da thought it'd be that hard !!

Lust and Other Drugs is set 10 years after the Mythos arrive and there's tension between all groups. The 2 main characters - a Mythos (who's a liaison officer and a Human who's a police officer) - try to get along while solving a number of police cases, while keeping tensions down and working through their developing relationship. This story is more focused on that aspect - the romance is quite slow burn, but it's actually sweet.

I enjoyed the story - yes there are twats that don't like integration but then again, there are others who will fight for it. Does have some funny moments - I don't normally compare books but this gives me Alien Nation / Bright vibes. Love it !!! Fair warning - triggers (drug use)

Lust and Other Drugs was originally released in 2019