Here's the Deal by Stefano Pride and Kashel Char, narrated by Zane Daniels 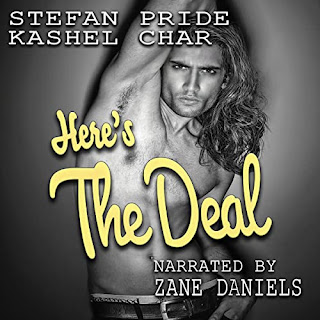 As Daniel is driving his new sports car from Cincinnati to Nashville, he notices a hitchhiker thumbing on the side of the highway. In the blink of an eye, a simple game plan forms in the young scholar's mind. Pulling over, the student offers the sexy older man a ride…with conditions.
Mike accepts the conditional offer from the very handsome and arrogant rich boy.
The deal was a simple one…at first.
Advisory: This book is not intended for listeners under 18 years of age, or anyone who is triggered by mild bondage and discipline with dubious consent. The story deals exclusively with male-male sex, and if a potential listener finds homosexuality offensive, this is not a story for you. While the towns mentioned are real, all the characters are strictly fictional and are not meant to portray anyone living or dead.
Here's The Deal was previously published as The Twisted Deal and has now been updated with fresh thoughts from a new coauthor who has been preparing for audiobook recording.
Jacquie's Review:
Told solely from Daniel's POV, we follow him as he picks up Mike and extends his offer. While they act out the pact, Daniel manipulates Mike into more. Before long there is some affection there. Mike and Daniel have a significant age gap but find common ground and by the end of their time together I really liked them.
It was interesting how it was told as if it was a memoir from a couple of years down the line, though I would have liked to know more about Mike after they parted ways.
I will say that 35mins of the audio is the first chapter or so of another series
Rating: 4 Stars
Lesetiger's Review:
Here's The Deal is a short, steamy story told exclusively from Daniel's point of view. Daniel takes hitchhiker Mike, a family man on his terms in his car for a bit. The two experience some first times and Daniel has a damn dominant way and pushes Mike for more. Steamy, sexy!
The story is different than I expected and at times I was shocked by Daniel's behavior, at other times I had to laugh. And in the end everything turned out well for both protagonists. Here I actually would have liked to know more about Mike.
Zane Daniels is a fantastic narrator. I like his comfortable pace and he expressed the emotions well too. It was easy to distinguish between the two protagonists. Zane Daniels did a really good job.
After that, you can listen to the first chapter of another book by the author duo, which the narrator also did a great job narrating.
Rating: Overall 4/5, Performance 5/5, Story 4/5
Welcome our newest reviewer, Lesetiger: 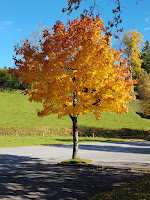