Ember's Moon by Fiona Lawless is a Cinderella retelling with a few twists..... 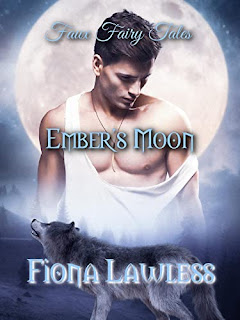 A cash-strapped earl risks everything to take his sisters to the prince's ball, only to be tempted by his fated mate!
The prince’s ball could be life-changing for Ember’s beloved stepsisters. But it will take a painful sacrifice to get them there. Ember has been in hiding, waiting for his twenty-first birthday to take his rightful place as the Earl of Carlysle. He’s naive. He’s afraid the penniless estate will not bring the husbands his sisters deserve, but for them, he must face his fears.
In his quest, he has more allies than he knows. His cool, ambitious stepmother shows a side of herself he’s never seen, and tradesmen like Hugh the brawny blacksmith pitch in out of love for Ember’s family. The entire town of Carlisle Crossing comes together to make Ember’s sisters’ dreams come true, but Hugh warns him against the dangers facing his kind.
They are rules Ember must not break.
On the night of the ball, a chance meeting with a masked man confuses Ember. He loses his heart and his inhibitions. Can Ember believe in a magical future, not just for his sisters, but for him as well?
Will Ember, break the rules?
Will Ember follow his heart and accept the love of his true mate?
On the night of the Prince’s Ball, the Prince is not the only prize.
If you're bewitched by fairy tales, deep family love, emotional sacrifice, and a good-hearted farrier godfather, buy Ember's Moon today! Ember's moon is an Mpreg, fated mate, fairy tale.
Miki J's Review

Ember's Moon is an unusual retelling of Cinderella without the nastiness & spitefulness. This book features wolf shifters, Alpha/Beta/Omega with MPreg.

Ember is doing his best to look after the estate, his stepmother & step-sisters. There is a ball, a spoilt prince and one beautiful and passionate night. The the story takes it's own little tangent - how each character learns & grows......no violence and is sweet & fluffy read.

If you are looking for a less catty, more wolfish retelling of Cinderella, you'll definitely want to pock up Ember's Moon by Fiona Lawless!