Dan Henshaw and the Undeniable Force by Eule Grey

on December 12, 2021
Dan Henshaw and the Undeniable Force by Eule Grey is a very sweet story about an adorable nerd who loves vampires....but this isn't a vampire story !!!
From the Blurb: 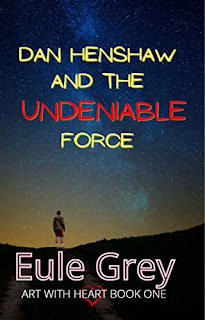 Life is hectic for office junior Dan Henshaw. What with temporary contracts and feisty colleagues, it’s no wonder he spends so much time gazing at the building opposite instead of getting on with his work.
When he spies a painting newly affixed to the wall, he knows something momentous is about to happen. Because it’s not every day you see moustache art, is it?!
Screaming vampires!
And if he should get in a tizz about the new guy, who wears shirts with vampire buttons, it’s only to be expected. Who wouldn’t?!
Jiggling jingles!
It’s going to be a sizzling December. From the moment John Taylor enters the office kitchen, festive sparks fly.
Miki J.'s Review:
What an adorable book to read. Low angst, sweet, funny, quirky and random.  This is not a paranormal story..... and there are no steamy times (although Dan's co-worker does try to assist with his education by discussing certain acts !!!).
Dan Henshaw and the Undeniable Force is told from Dan's POV - it did take me a bit to follow the cadence of the story but once I was on the same wave-length - what a ride !! Dan seems to be on the spectrum (no offence) and he's living his life and going to work, normal stuff. It was cool to see from his point of view and how he interacts with family, friends and co-workers - he's so adorable ! One day he notices a new art installation in a building he admires, which sets off his imagination... and he also starts to notice the new co-worker, like, it's just soo sweet. Dan Henshaw and the Undeniable Force is a great book to read for a cozy afternoon.
5 Stars ARC Contemporary Miki J sweet