Jacquie and Lesetiger checked out one of my favourite reads from last year on Audiobook - let's see what they had to say about Cabin Fever by Brigham Vaughn below: 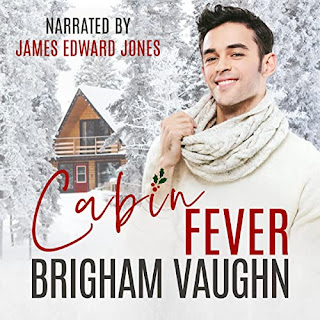 It may be cold outside, but inside, the temperature is rising. When grad student Kevin Taggert goes home with his best friend for Thanksgiving, the last thing he expects is to drool over the guy’s dad. Forty-eight-year-old Drew Freeman would love a relationship, but he never expected to find it with his son’s best friend.

When a last-minute change of plans leaves Drew and Kevin alone in a cabin the week before Christmas, the heat between them is too much to deny. Although they promise it’ll only last the week, every day that passes brings them closer together. When Christmas Day arrives - along with Drew’s son - can they salvage the relationship and the holiday?

With his family too far away, Kevin spends Thanksgiving with his friend Jason and his friend's father Drew. Then, when it doesn't work out again at Christmas that Kevin can see his family, Kevin is at a cabin with Drew. There is no denying the attraction the two have for each other and this is where things get hot.

I really liked Kevin and Drew, there is a considerable age difference between them and I was pleasantly surprised at how well the author described the development of their relationship. The two soon feel more for each other. Drew and Kevin have a lot in common and feel comfortable in each other's company. But hovering over their happiness is Jason, who then suddenly appears in the doorway. Now it is no longer hot in the cabin, but freezing cold.

A great setting in winter with snow, cabin magic, Christmas and lots of emotion. Highly recommended!

A perfect book for this time of year with the main bulk of the book being set at Thanksgiving and Christmas.

I liked that there was a significant age gap but that their different ages didn't affect how quickly they bonded over common interests. They really did work as a couple and not just as two people who were attracted to each other.

Of course there are a couple of bumps but they are quickly sorted and we get a decent slightly steamy epilogue.

The narration was good, at times I got confused as to who was speaking and didn't always feel a lot of emotion from it, but I really enjoyed the tone and pitch. I would listen to more of this narrator in future as the pacing was great and it was easy to follow along with.

I'd listen again for sure