A Handful of Joy by Pat Henshaw

A Handful of Joy is a short read but a really sweet one and it felt different to a lot of the other short reads I have encountered recently. 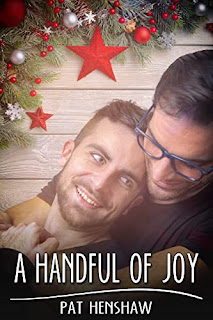 When does never turn into happily ever after in the search for love?
Top accountant of Manzanita Imports in Sacramento, Ted Abbott stopped participating in the love game after he turned thirty quite a few years ago. He’s not tempted by the cute young new hires or the product reps his loyal staff suggest he ask out on a date.
Chicago contractor Matt Patterson is on the verge of giving up too. He’s worked his way up from apprentice carpenter to co-owner of a thriving business. At forty-something, he’s considered a lucky catch for anybody looking for a sugar daddy, which he knows only too well.
The chance of them meeting is nil until Matt’s uncle who lived in Sacramento dies and leaves his estate to his nephew. After they meet in a dilapidated bar called The Roost, could their paths actually merge and become one?
Red's Book Reads Review:

Ted is an accountant who after a long day decides to pop into a local bar for a beer and to recapture memories of better days. Instead he meets Matt, a construction worker who has recently inherited a bar. The story follows Matt and Ted over the next couple of months as they help each other and develop their relationship. I liked that this wasn’t a quick one weekend kind of story and that you got a bit more of their lives and a proper HEA at the end. A Handful of Joy is a really good short read.

A Handful of Joy is short, sweet and to the point, but it doesn't lack for anything because of that... Pat Henshaw is able to pack a complete tale into the seven chapters they provide. It's got a meet-cute, but not an insta-love story which for a short is pretty amazing!  I love how the story flows and provides a satisfying HEA in so few words.