A Dashwood of Sense and Sensibility by Anyta Sunday 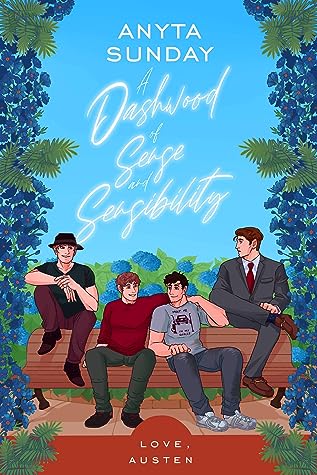 Anyta Sunday is one of those authors that I pick up knowing that whatever I'm about to read is going to be amazing. A Dashwood of Sense and Sensibility was no different.

Noah Dashwood is the practical type. Now the beloved family home’s been sold to settle their father’s debts, Noah’s number one priority is finding a new place to live for himself and his brother. But the old house’s last gift to him is completely unexpected: Wade Ferrars, literally walking over broken glass to shake his hand, sexy and lovely and everything a guy could dream of. He even makes Noah . . . believe in romance.
Except . . .
Why so hot and cold?
What is he hiding?

Oh God. Disaster. No money, no home, no man . . . Zach Dashwood should really, like, get a steady paying job. Help his brother out. Ohhh, maybe Ask Austen Studios has room for a talented musician? Maybe he should just nip in there . . .
This guy with terrible tie-taste is really something. Working on a Sunday, poor thing. Okay, they should hang out, maybe he’ll put in a good word with the boss—
Oh, he is the boss.
The clever, funny, decent, well-earning, sexy boss.
Well that’s . . .
Why has this guy not been snapped up yet? New mission!


Two very different brothers. Both in for a surprise.

A modern, gay retelling of Jane Austen's Sense and Sensibility.

What was different about A Dashwood of Sense and Sensibility from the rest of the Love Austen books is that it covered two love stories - much like Austen's Sense and Sensibility. The four main characters were each wonderfully written and there were cameos from all of the other couples from the Love Austen series. There were cameos from side characters in other books as well and as such, I fully believe that this book is best enjoyed after having read the rest of the series. It can be read as a standalone, but I'd definitely recommend reading the others.

Our first couple is Noah and Wade. They meet when Noah thinks his twin brother, Zach, has broken into their childhood home. The attraction is immediate between them. The entire first quarter of the book is dedicated to Wade and Noah getting to know one another. This couple, in their first part, had me hooked immediately. It also had me pleasantly surprised by the lack of usual slow burn that is a cornerstone to Anyta Sunday's works.

She really had me in the first half, not gonna lie. Because the rest of the book? They were infuriating with the will-they-won't-they parts.

The second couple is the carefree Zachary Dashwood with the handsome owner of Austen Studios - Brandon. They meet when Zach accidentally gets locked into the studio. He doesn't realize at first who Brandon is but slowly figures it out. They follow a more traditional Anyta Sunday path of slow burn, miscommunication, obliviousness, and generally making me want to whack one character (Zach in this instance) over the head with a clue by four.

Of the two couples, Zach and Brandy were my favorite. They were more entertaining and there was just something about them that was magical. It was a magic shared with Wade and Noah, but to a lesser extent.

A Dashwood of Sense and Sensibility was a perfect cap to the Love Austen series. Unlike the other books in this series, it was a dual POV - but between the Dashwood brothers, leaving Wade and Brandon's thoughts visible only through their actions. It was sweet and moderately low angst and an amazing read.

"... I trust him not to sacrifice himself for a possum."

What a wonderful book. Even though it flicked between the 2 brothers and their relationship hiccups, the story flowed easily. I loved the wry humour and steadfastness of Noah and the exuberance & naivety of Zach. This book made me smile (Brandy....bahaha) and laugh....but also the bittersweet moments, and the anguish..... Zach's awkwardness when he does finally realise, hehehehe. Overall, another great book in this series!