Yours To Be Forgiven by Hayden Hall

Yours To Be Forgiven is the first book in Hayden Hall's new trilogy and starts off with a huge clash between boss/employee... 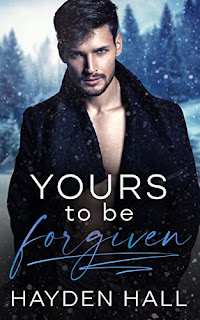 Cold-hearted Max Cullen is incapable of loving anyone but himself.
Ruthless, arrogant, and, unfortunately, hot as hell, Max has a way of bringing out my worst self. He also happens to be the branch executive of the financial firm I work for, as well as the last man I would ever want to be snowed in with. Oddly specific? Yeah, about that last part…
Max’s petty vengeance makes me break a Christmas promise to my children and gets us both stranded in his remote cabin. To make matters worse, the jerk has the nerve to look even hotter when he takes his suit off.
As if being stuck with him isn’t bad enough, it turns out we’ll have to share the bed.
Is it the crackling fire or the burning taste of whiskey or something else altogether that’s heating up the space between us?
His annoying bickering and his rotten heart make me want to punch him, if only he would quit looking at me like that.
We’re hurling toward the breaking point. If the storm doesn’t kill us, we might just kill each other. Or do something else, equally disturbing.
I swore I would never swoon again, but I’m starting to think I'm on a promise-breaking streak.
Yours To Be Forgiven is the first in my new trilogy. Though the romance between Max and Ethan reaches a happy ending here, there is a subplot that continues in book 2, Yours To Be Forgotten (available for pre-order). This book was written for the fans of enemies to lovers, damaged millionaires reformed, broken hearts healed, and snowstorms trapping two opposing men in one cozy cabin. Give yourself an early Christmas gift with Yours To Be Forgiven and get immersed in the age-old tale of unexpected love.
Heather's Review:
It took me a long time to warm to Yours To Be Forgiven because I honestly didn't like either character in the beginning... Max came off as uncaring, brash and honestly repulsive.  Ethan was kind of weak and sniveling and if I hadn't been reading an ARC, I would have DNF'd at about 17% and put the book away for something with relatable characters... but two things made me keep going - a belief in Hayden Hall's writing and my need to see how it ended...
I think for me, I need to see the glimmer of redemption earlier in the story, but by pushing on, I found that the characters did grow on me, enough to finish the book and feel satisfied with the writing and the ending, but I never completely clicked with Max and Ethan... That being said, I warmed to the story as it went on and did enjoy their relationship in the end. I think Hayden Hall created excellent world building and I think I may grow to like them more as side characters in book two.
Rating: 4 Stars
Sarah C's Review:
I love a good enemies to lovers novel, and Hayden Hall definitely fulfilled that promise with this novel. Hall utilizes some good tropes to make the change from enemies to more - including forced proximity and there was only one bed.

I actually really liked the hatred between the two men when the book started. The fact that they could not see eye to eye on anything, the way that they interacted with one another and the narration they used to describe one another? I loved it. If you want your love interests to have a softness for one another from the jump, even in an enemies to lovers, then this book is not the one for you. If you want to really feel that tension and that dislike until the moment it shifts? Then look no further.

The problem, for me, was the moment it shifted. It felt too sudden. The actual change from enemies to lovers was such an about face that I felt like I had emotional whiplash. There was no gradual change in how they viewed one another. They were trapped in the snow. They hated each other. They were attracted to each other. Suddenly they didn't think the other was so bad. If that progression had felt more natural, I think this would've easily been a five star book because Hall's writing, the characterizations, the tension, and the spicy scenes were all amazing.

So would I recommend that you read Yours To Be Forgiven? Yes. Very much yes. Because this book was great. The main characters were sometimes unlikable, but that was part of the purpose of the story. They were pretty well developed and they were interesting, which I care about a lot more than if a character is likable. So yes, read this.
Rating: 4 Stars
4 Stars Enemies to Lovers Heather Sarah C Series