Cara Dee has written a number of books, and each one brings a bit of something different. 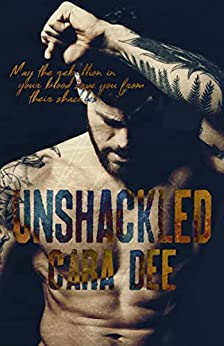 Unshackled spares no one, and along the way, you’ll get everything from high-speed car chases, secret meetings in the dark, and the rawest hours of grief, to strong family ties, humor, and unconditional love.In the wake of the bloodiest war the Sons of Munster had seen in a long time, we were supposed to celebrate our victory and move on with our lives. I wanted to see my brothers-in-arms dance and drink way too much. I wanted to hear laughter and Irish music. Instead, we were a syndicate crushed by grief.Shannon O’Shea had lost more than most, and every fiber of my being screamed at me to pull him from the depths of his despair. As the father of my best friend, he’d been there for me when my parents kicked me out for being gay. Now it was my turn. I had to find the answers. I had to rescue him.The day he asked for a favor and demanded discretion, the plan unfolded before my eyes, and I couldn’t resist the temptation. No names, no faces. He wouldn’t know it was me in the darkness. At the same time, the shackles around my wrists tightened as old enemies slithered back out of the gutters of my city, and my brothers and I were once again on the warpath.
Autumn's Review:
While this book was created to be read as a standalone for a set of characters from This Life series, I highly recommend reading the first two books first. The first few chapters seemed to flow, but held nothing that kept my attention. But, I'm glad I pushed through as the book took a turn where I hadn't thought it would. Between emotional warfare, sexy times, and pushing boundaries, this book is well written.
I'm giving this book 3 and half stars, as I thought it was a bit rushed in places, and I had trouble connecting with the characters. Overall, a decent read though.
3.5 stars Autumn Hurt/Comfort