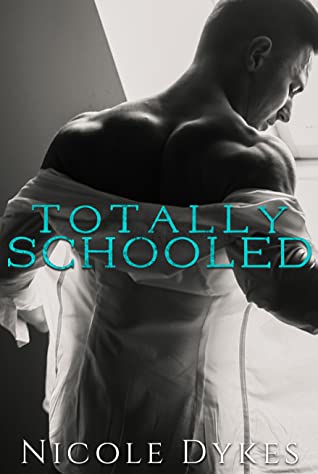 Nicole Dykes' second foray into the MM romance genre, Totally Schooled, is a beautiful forbidden romance between a teacher and the father of one of his students. Find out if Sarah C and Red fell in love with Rafe and Nolan.

Nolan
I’m a teacher who has only one thing missing from his life: a healthy relationship.

I have a plan in place. This should be easy.

No more toxic men. No more casual hookups.
I want something real. A love that’s equal, not lopsided.
I’m a fixer at heart, but I’m done with the hopeless and the selfish.

Rafe
I’m a dad. Pure and simple.
The only thing I want is for my daughter to be happy and healthy.
I keep my head down. I work like crazy, and I found her a great school in a new place.
I don’t have time for anything else but her.
She has my heart, leaving little for anyone else.

When this kindergarten teacher and single father come together, something has to give. Lines are crossed. Secrets are shared. Hearts shatter.
Who knows?
Maybe they can teach each other something.

Sometimes, an author's second book (either in total or in a specific genre) feel a little rushed in order to keep the momentum gained with their first. That was not the case with Nicole Dykes' Totally Schooled. Instead, she delivered a perfectly paced love story that had me rooting for Nolan and Rafe, falling in love with Rafe's adorable daughter, and smiling by the end.

Rafe is a single father, protective of his daughter, Hailey, and not fully ready for her to go off to kindergarten. Nolan is Hailey's new kindergarten teacher, a closeted (at work) gay man who dreams of happily ever after but has a history of choosing men who are more than just a little bit of a fixer-upper. They meet at a school orientation and the physical attraction is immediate and tangible - but it is also forbidden with the whole Nolan being Hailey's teacher thing.

But over the course of the book, they get to know one another. First as friends and then later as lovers, and we, as readers, get to watch them fall head over heels in love with one another. And its such an amazing journey. Both men have some broken parts to them, traumas they carry from their pasts, that need to be addressed before anything real can bloom. Both men are also a little reluctant to let that happen.

The prose in this book was wonderful. It told as much about the character's personalities based on the tone as the narration and words the characters said told about them. The side characters that we got to meet were a lot of fun. Honestly though, my favorite thing was watching Rafe and Nolan with Hailey. I loved the written out sacrifices that we got to see Rafe making to make sure his daughter was happy, healthy, and thriving.

This book was incredibly lovely and I will forever love it.

Trigger warnings for off page homophobia and references to drug usage.

This was such a beautiful story and my heart broke for both Nolan and Rafe. Hailey is the most adorable kid and I loved how she managed to wrap both men round her fingers and helped bring them together. The relationship between Rafe and Nolan was just so well done and I loved their story. This was my first book from this author but I will definitely read more books if they are like this!

I loved the characters in Totally Schooled from the first chapter... first Rafe and Hailey and then Nolan quickly wormed their way into my heart and stayed there!

The story had a realistic flow, amazing side characters, a hint of angst, a dash of regret, and both characters who had expectations for their lives that needed some adjustment...

In both books I've read from Nicole Dykes, I've found that she writes with an flow that makes reading a pleasure and allows me to sink into the characters world and stay there for the duration of the book!

While this book is not explicitly a holiday story, it resonates with fabulous messages for the season and does include a storyline that spans from the First Day of school through the holiday season and beyond...