on November 18, 2021
One of the things I love about blogging is being able to connect with new to me authors and find hidden gems... and that's part of why I started Throwback Thursdays... to give a spotlight to books that we may not have found when they first came out!  Wholehearted didn't make my radar in February of 2020, probably because I was working stupid hours trying to deal with changing protocols in the resort I worked at as we started to deal with COVID-19, but now that I've found it I've added it to my personal TBR and will be reviewing soon!
From the Blurb: 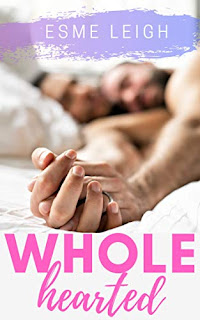 How can you fall in love if you're hiding your heart?
Jack is handsome, talented, famous and gay. But he hates his new album and his ""people"" are adamant that he won't be coming out any time soon. His manager used to be his greatest support but now sides with the record label boss Jack can't stand. With paparazzi outside his house and a mandatory fake girlfriend inside, Jack's life no longer feels like his own.
But this is the price you pay for fame. Isn't it?
When Jack meets Dylan there's an instant connection (and the sex is incredible). It's the kind of love you hear about in songs.
But is Jack brave enough to write one from the heart?
Exclusive Excerpt:

“Shit,” Jack said, peering inside his fridge and not seeing any milk. “Shit shit shitting shit.”

He knew there was no milk. He knew he’d had the last of it when he’d got back yesterday and he remembered telling himself he’d better get some before morning. But then he’d started playing FIFA and he’d talked to his best mate Joe back in Manchester and he’d drunk a few beers and he’d just forgotten all about it. And now his mouth tasted of beer and the massive bag of Doritos he’d polished off in the early hours and he needed tea. The kettle was already boiling.

He closed the fridge door and then opened it again in case his cleaner had picked some up and stashed it somewhere different that he’d missed, but no. There was no milk. And no tea for Jack.

As he crossed the kitchen, the floor tiles cold on his bare feet, his phone buzzed in his pocket. The pocket of the trackie bottoms he hadn’t even taken off last night, instead sleeping fully dressed on top of his duvet. He really needed to sort his life out.

He pulled his phone out, scratching the back of his neck with his other hand, hearing his spine crack and pop and remembering that Patrick, his personal trainer, had told him he should go and try yoga - it would help him relax. Jack didn’t really do relaxing, unless it involved FIFA and/or lager.

“Morning, knobhead,” he said into the phone.

“Nice,” Tom, his manager, said. His voice was much too perky for the time of day, Jack thought. Although… what time was it? He turned to look at the digital clock on the microwave, but that said half eleven. It felt earlier.

“Is it half eleven?” he said into the phone. Unlike Tom’s, Jack’s voice sounded rough and croaky.

That wasn’t really a lie. He’d thought of a line when he’d been lying in bed, wondering whether or not to have a wank. And then he’d had a wank. Of course he had. It had never really been in question.

Jack tipped his head back, feeling a pop at the base of his skull. He stared up at the kitchen ceiling, squinting slightly at the overbright halogen bulbs.

“Right,” Tom said. “We’ll expect you here for half one then. At the latest, Jack!”

“Two at the latest,” Jack said, hearing Tom sigh down the phone. “No problem.”

He ended the call, rolling his eyes at Tom, and then thumbed Twitter open and typed “Woke up gasping for a brew and I’m out of milk” He added an angry face emoji and sent the tweet, waiting a second for the RTs and faves and replies to start coming in before shutting the app down again and putting his phone back in his pocket.

Tom had been on and on at him to use Twitter more - it was really good promo apparently and since he had almost ten million followers he should probably try - but he never felt like he had anything interesting to say. Well, he had plenty of interesting things to say, but nothing he could put on the internet. He opened the fridge again and took out a can of Red Bull, cracking it open and wincing at the too-sweet sharpness of the first sip as he headed back down the hall to his bedroom. He probably shouldn’t be drinking Red Bull. He was already in a weird mood - restless and tense and wanting to fuck it all off. Instead he stripped off yesterday’s clothes, leaving them in a pile on the floor at the foot of his bed and padded over to the en-suite with it’s huge rainwater power shower.

In the shower, he tipped his head forward and let the water pummel his shoulders and the back of his neck. The water pressure was so strong it was almost painful. Jack rolled his head from side to side, letting it hit the tendons in his neck. He twisted so the water could reach his lower back and sighed as he felt the muscles there tense and then relax. He really didn’t want to go into the studio today, but he wasn’t really sure why. He used to love it. It used to be his favourite thing by far. He didn’t know what had happened.

He washed his hair quickly - the pressure of the water on his scalp halfway between pain and pleasure - and then stepped out of the shower cubicle, rubbing himself down quickly with one huge, dark blue, fluffy towel, before wrapping another around his waist and padding back out into the bedroom.

He was swigging from the Red Bull he’d left on the bedside table when he heard the door buzzer.

“This had better not be fucking Tom,” he said to himself, making his way down the hall to the entry system. “I said I’d be there and I’ll fucking be there. Christ.”

He pressed the screen to show him video from the gate. It wasn’t Tom. It was a boy - a man - he didn’t recognise. Long hair, half-hanging over his face as he looked down at his shoes. Jack squinted. Boots. He was wearing pointy-toed boots. Who the fuck was this? If it was a pap he was going to freak the fuck out.

“Yeah?” Jack said just as the boy looked up and directly into the camera and... Jesus Fucking Christ. His eyes. And his mouth. Jack’s dick twitched again and he pressed down on it with the heel of his hand. It was too long since he’d had sex. Much too long.

His voice. And his face. Jack opened his mouth to speak, but nothing came out for a second.

“Do I know you?” he managed, eventually. He sounded weird. Squeaky. He wanted to punch himself in the face.

“Ah no,” the boy said. And grinned. And Jack felt all his breath go out of him. He might even have groaned. Dimple. Massive fucking dimple.

“I’m Dylan,” he said. “I’m, uh, I live just…” He turned and pointed over his shoulder. “I mean, not right there. Not that house. But a few houses down. I’m a neighbour, is what m’saying.”

Dylan dipped his head so his hair fell forward again and he scrubbed a hand through it before flipping his head back and there was that face again.

“Yeah, sorry,” Dylan said. “This was a bad idea. It was… My housemate sort of dared me to-- I’ll just leave it here and go. Sorry.”

Thanks to all the ridiculous security briefings he’d been given, his first thought was a bomb. And then he pictured a basket of kittens and what the fuck was even going on in his brain. (A basket of bombs? An exploding kitten?)

“Oh shit, yeah, sorry!” Dylan said and grinned again and his face was just - Jack realised he was half-slumped against the hall wall - his face was incredible. Beautiful. Adorable. Dylan held up a two litre bottle of milk. “We saw your tweet.”

Jack’s mouth opened, but no sound came out.

“Sorry again,” Dylan said. “This was a really bad--” He shook his head, glancing back over his shoulder where presumably the housemate was waiting and taking the piss. “But you needed milk, so…”

Jack watched him bend down and put the milk just inside the security gates.

Jack found himself nodding at the screen, even though it was one-way so he knew Dylan couldn’t see him.

“It’s semi-skimmed,” Dylan said. “I don’t know if that’s what you… Ugh, god, sorry, I’ll shut up. Sorry again. Enjoy your tea.” He smiled into the camera again and held one hand up before turning and disappearing out of shot.

Jack found himself leaning closer to the screen to see if he could watch him go, even though he was already out of the camera’s range.

He was talking to himself more and more, he’d noticed. It wasn’t good. He should get a dog or something so he didn’t feel quite as mental. He could call it Pavlov, he thought and almost smiled. But then he felt his dick, which had been half-hard since he’d seen Dylan’s mouth - or maybe when he’d scrubbed his hand through his hair quite roughly and then smoothed the right side of it down with one huge hand, long fingers.

At the thought of Dylan’s fingers, Jack’s dick brushed against the towel and he knew there was no way he was getting out of the house without another wank. He dropped the towel on the hall floor and headed back to the shower.

Esme Leigh is the pseudonym of a bestselling romcom author.

She loves writing and reading mm romance, has never met a cup of coffee she didn’t like, and dreams of Spanish beaches, red wine and paella.

She is currently working on her next steamy romance. Or she’s watching TV – one or the other.