We are less than a week away from Fiona Glass' 1 year publish-aversary for December Roses so let's celebrate upcoming milestone with an exclusive excerpt from the book! 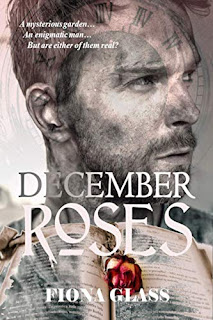 A mysterious garden... an enigmatic man... but are either of them real?

Recovering from a bombing in 1990s Belfast, British soldier Nat Brook is sent to remote army rehab unit Frogmorton Towers to recuperate. At first he’s lonely and depressed, but then he finds the remnants of a once-beautiful garden, meets the enigmatic Richie, and begins to fall in love.

Gradually, though, he realises there’s something odd about Frogmorton. He can rarely find the same place twice, and Richie proves every bit as elusive as the Chinese pagoda or the Scottish glen. Nat begins to question his own sanity, because if the garden is imaginary, what does that make the man he loves? Faced with the shocking truth, Nat must decide whether to stay with the army - even though that means hiding his sexuality - or find acceptance elsewhere.

"As happened so often out here, he was so lost in thought he didn’t watch where he was going. A few spots of rain made him glance up, and he found he was on the terrace where he’d first met Richie, without the slightest idea how he’d got there. It looked much the same as it had before: paths swept, beds weeded, the fountain casting its thin stream high into the air; but the roses had gone, presumably blown to tatters by the last autumnal storm. He lingered for a while, listening to the patter of water on the lily pads, feeling relaxation seep into his pores as he drew the rich scent of newly-wet earth deep into his lungs. He was lucky to have found this sanctuary; already he could sense his problems easing back into proportion. However ghastly this Christmas might seem, it was just one day. Tomorrow it would be over and he could get back to his routine.

The rain must have been a clearing shower. The clouds were breaking and the pallid sun cast rainbows in the fountain’s spray. A gleam of white showed beyond and he wandered over to investigate. It was a balustrade, in lustrous white stone, flanking a flight of steps he’d never noticed before. Steps that disappeared into the foliage below, just begging to be explored. His leg had stiffened in the chilly air but he couldn’t resist. Clutching the cool stone rail he began to clamber down. Given the state of the rest of the garden he expected the steps to be chipped and cracked but they were in good nick and swept clear of leaves and moss. At the bottom was a different path, straight and well-gravelled and bordered with flowerbeds at least a yard wide.

And leaning against the bottom of the balustrade was Richie, bundled into an old-fashioned flying jacket with the inevitable cigarette dangling from one hand. ‛Oh, hullo.’ He sounded unsurprised, as if he’d been expecting Nat and had deliberately hung around.

Nat took a cigarette from the box Richie held out, waited for a light, then puffed until the tip glowed red to cover his lack of words. Now it had happened he wasn’t sure how he felt about meeting the other man again. Part of him was jumping for joy (although which particular part he wasn’t going to admit) but part still smarted at the way he’d been left standing in the woods the other day. Eventually he took the cigarette out of his mouth. ‛You sticking around a bit longer this time?’ Then winced at the sarcasm that sharpened his voice.

Richie, though, seemed to feel he deserved it. He shrugged, and his tone was placatory. ‛Sorry about that. Cha— that is, the chap I was meeting is being very good to me. I don’t want to risk getting into his bad books.’ He turned to walk along the path and Nat fell into step at his side, unconsciously matching the rhythm of their pace. He was still peeved, but the apology sounded genuine and when he glanced sideways, the green eyes were sad. He nudged the man with an elbow and when he looked up, grinned at him.

It was as though the noonday sun had burst forth at his side. The shadows vanished to be replaced by a beaming smile. ‛Glad I came out here now. You’ve made a break for it too?’

‛Christmas?’ For a moment Richie's eyes rested on him, startled and open wide, but then he shrugged. ‛I know what you mean. It can be beastly, can’t it?’

When she isn't being a pane in the glass, Fiona writes darkly humorous paranormal romance, often featuring gay characters and almost always with a twist in the tail. Her short stories have been published in anthologies and magazines including Mslexia, Paragraph Planet, and The Library of Rejected Beauty. Her books include gay paranormal romances 'December Roses', 'Trench Warfare' and gay vampire romance 'Echoes of Blood', all available on Kindle and Kindle Unlimited.

Fiona lives in a slate cottage within stone-throwing distance (never a good idea in Glass houses...) of England's largest lake with her husband, several pot plants and a vast collection of books. She enjoys history, gardening and photography, and rarely has her nose far from the pages of a book - or a cup of tea.

December Roses is currently available on Kindle Unlimited and e-book purchase through Amazon.