The Professor's Dragon (Here Be Dragons, #2) By Lousia Masters

The Professor's Dragon is enjoyable, low angst, low drama. Featuring a slow burn and a different tone from book one, find out below what Jacquie thinks of the book. 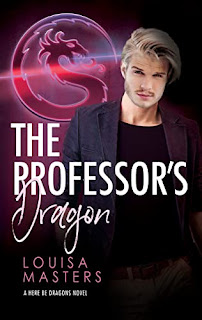 From the Blurb:
It was love at first sight… with my professor. What’s a dragon to do?
For two years, I’ve been pining over Professor Sarris. I knew the moment I saw him that we were meant for each other, but it’s not to be. For one thing, I was his student, and he’s the most ethical man I know. For another, he has no idea I’m actually a four-thousand-year-old dragon from another dimension.
When my people fled to Earth to avoid extinction, I vowed to clean up my life and stop acting like a fledgling. It’s bad enough that nobody takes me seriously… sure, maybe I used to be flighty and irresponsible and caused a few interspecies incidents, but that’s all in the past. I have big plans for the future, and this college gig is the first step in proving myself. I’m not endangering this fresh start for anyone.
But then my professor and I wind up at the same party, and suddenly it seems he’s not completely out of reach. Except I’m still the adorable flirt nobody wants to rely on, and convincing him we should be together while proving I’m a changed dragon is a monumental task.
Good thing I’m up for the challenge.

The Professor's Dragon is another enjoyable outing in the Here Be Dragons series, though slightly different in tone to book 1. I would advise at least reading book 1, if not the Hidden Species series too.

Dustin has matured since his arrival in the human realm and it was great to see the character growth there, he's stepping up for the community and is a lot more grounded than he once was.

Rob was an interesting character, a human who is connected to the community, so there's no drama about the dragon reveal. I didn't quite connect to him but I understood where he was coming from. His morals are important.

The Professor's Dragon was less silly than some of them, mainly because Dustin is trying so hard to be this new version of himself.

The romance was sweet and they were adorable together. A slower burn but worth the wait.

You'll not be disappointed with this book. Dustin, up until now, has been seen as the ditz - so it is nice to see him "grow up" for won't of a better phrase. And Rob is a lovely human surprise. As you read the story, you feel as they do....as I said, beautiful!