The Jerk Next Door by Mia Monroe

First off, I am loving that Mia Monroe is embracing more mature men in her writing and making it okay for her characters to find love with another man even if they hadn't ever experienced same sex attraction before!

From The Jerk Next Door Blurb: 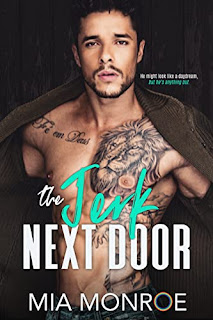 He might look like a daydream, but he’s anything but.
My life is perfect. No, really. Dream career, great social life, a fantastic condo, and I’m easy on the eyes. It’s just that I’m a little bored with it all.
Until my new neighbor moves in. He’s unfriendly, uptight, and unwilling to compromise. Looks like annoying him just became my new hobby.
Poor guy has no idea who he’s up against. The Jerk Next Door just met his match.
The Jerk Next Door is a standalone romance featuring two warring neighbors, unexpected favors, an awakening of epic proportions, and very thin walls. It is low angst, high heat, and even higher snark.
Heather's Review:
The Jerk Next Door is everything I expect from a Mia Monroe story - steamy, funny, sweet, just a touch of angst and amazing characters that you want to lick and call dibs on!
Ace and Reign have instant attraction to one another and it manifests as frustration and teasing... I love their early interplay, especially as Ace has never been attracted to a man before.  Both men have had past hurts in previous relationships and that adds to their slightly gun-shy movements and interactions... it feels realistic and the tension ramps up in each interaction...
One of the things I love is that even though this is a bi-awakening/gay for you type story, the author doesn't dwell on that over much - there isn't a lot of fretting over why and how, it just becomes an is... and in a book that is just over 200 pages, I appreciate that it doesn't bog down the story...
I honestly love how in sync the characters are - even to the point of noticing when moods shift... and it warms my heart... of course the fact that they're in sync in the bedroom makes for some steamy scenes I won't forget either.
If you like a good mature bi-awakening story, than The Jerk Next Door is the perfect book to immediately add to  your TBR!
5 Stars bi awakening Contemporary Heather low angst mature characters Standalone steamy