The Hound of the Burgervilles by EJ Russell

".....you're worth whatever sacrifice I have to make, whatever debt I have to pay."

From the The Hound of the Burgervilles Blurb: 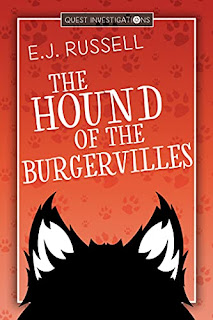 This case is really going to the dogs…
After I try a little off-the-books interrogation to locate my selkie almost-boyfriend’s nearly-ex-husband (don’t ask, it’s complicated), I’m in the doghouse again with my bosses, who bust me back to surveillance. Ugh. So when another human inexplicably storms into Quest Investigations—something our security spells ought to prevent since I’m supposed to be the only human admitted to our offices—I’m reduced to staking out local fast food restaurants to check out the guy’s alleged sighting of a giant, glowing-eyed, dumpster-diving spectral hound.
Ridiculous, right? Humiliating, too, not to mention boring. But at least they didn’t fire me.
Imagine my surprise when there actually is a giant, glowing-eyed, dumpster-diving spectral hound—one of the Cwn Annwn, Herne the Hunter’s traitor-tracking dog pack, to be exact. Jeez, who let this dog out? It’s my case, though, so it’s up to me—Matt Steinitz, aka Hugh Mann—to return him to Faerie. But while Herne’s normally hopping kennels are inexplicably unpopulated by pups, they’re playing host to one extremely dead body.
Uh oh. Looks like someone’s bite was a lot worse than their bark.
Guess my love life will have to take a back seat again while we nose out the truth.
Dammit.
The Hound of the Burgervilles is the second in the Quest Investigations M/M mystery series, a spinoff of E.J. Russell’s Mythmatched paranormal rom-com story world. It contains no on-page sex or violence, and although there is a romantic subplot, it is not a romance. The series is best read in order.
Miki J.'s Review:
The Hound of the Burgervilles is a direct follow-on from Book # 1. Matt/Hugh is still his adorable dorky self but his frustrations and snarkiness (from his lack of confidence) is starting to show through to this friends & peers.  This all stems from his lack of relationship with Lachlan...or Ted.....he's still trying to work out where his heart lays.  The Lachlan/MattHugh dynamic is cute and adorable - and honorable.  Matt/Hugh also realises that being human in a supernatural environment is not really that bad of a thing.
And yes, still a very very very slow burn (bahahaha). Love the mystery / suspense aspect and book ends on HFN ending....bring on Book #3!
Mystery, slow as molasses burn, heartfelt and so worth reading!
Rating: 5 Stars
5 Stars HFN Miki J mystery Series slow burn suspense