So excited to share a blurb from Hellie Heat's Justis Reborn which comes out TOMORROW!  This is the third book in The Elysian Chronicles! 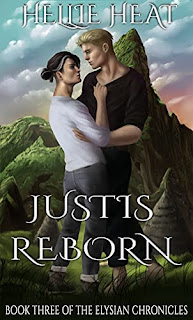 With the fate of their world in the balance, can their love outlast the trials of war?
Freed from the clutches of President Axel Tovar and the esteemed and noble government of Elysian Island, Micah Veyhl and Eden Voss flee to the beautiful Isle of Justis, a place where it seems their dreams may finally come true. Ghosts of the past live there, as well as the strange force called Dunamis, said to unite all living things. The enchanting and mysterious leader of Justis, Mercy Sanctus has powers all her own. But beneath the surface, all may not be as it seems.
Secrets emerge...about Tovar’s past, about Micah’s powers. And as they begin to acclimate to their new and unfamiliar environment, their lives begin to change in ways they never could have imagined, testing the strength of their bond and the depths of their love.
Who is a traitor and who an ally? As Micah’s powers grow, he begins to doubt even himself. Because to destroy Axel Tovar and unite the insular worlds of Justis and Elysian, sacrifices must be made. Micah must become stronger than he ever thought possible. But in doing so, will he push Eden away? And will embracing his true nature come at the cost of the new life they’ve painstakingly worked to build?
Excerpt:
“Do you want to go inside?” Micah asked.
Eden swallowed. To go inside was to be alone. Alone with Micah and the questions that stood between them. Questions that needed to be asked.
What if the answers broke them irreparably? Eden wasn’t sure he could survive that. Not with Micah so close.
“Yes,” he managed to grit out. Micah smirked, most likely at the tremor in Eden’s voice. Eden turned to head inside, his heart pounding erratically, knowing Micah would follow.
Inside, the hut was meager and sparse but surprisingly cozy. There was a small bed in the corner and a desk with an oil lamp next to it. A bookcase was lined with a few titles Eden wasn’t familiar with, and as his eyes adjusted to the dim light, he approached, scanning their spines.
“Sanctus gave those to me,” Micah said from behind him. “After my mother died, I’d never had a book of my own. They have a library here. So many books. More than I’ve ever seen. I think you’d like it.”
Eden looked up. Micah hadn’t moved, still standing in the doorway, arms crossed over his thin chest. “This is your cottage?”
Micah nodded, his Adam’s apple bobbing as he swallowed.
“So, I’m to stay here with you, then?” Eden asked.
Micah’s cheeks flushed. “If that’s what you want…”
“Of course it is,” Eden said without hesitation. “There’s nowhere else I’d rather be.” He moved around the room to settle on the bed, running his hands over the sheets. Sheets that Micah had slept beneath. His heart stuttered in his chest. “Will you come here?” he whispered, his voice coming out in a raspy breath.
Micah moved like a puppet on a string, drawing nearer as if by compulsion. Eden could feel the heat between them. Heat that had always been there. But now that they were alone, it felt electric with tension and need.
There was so much to say. But where to begin?
“Eden, there’s…” Micah trembled, standing just out of arm's reach. “There’s something I need to tell you.”
Eden didn't move, didn’t speak. Only waited. Waited for Micah to make the first move.
“You saw the broadcast. Of the arena. What they did to those people. What they would have done to me. And to Delta.”
Eden nodded, silent, watching. The government had tried to kill Micah and Delta that day, had trussed them up, loaded them down with Silt, and prepared them for execution. But instead, Micah had done something Eden had seen only once before. He’d killed with his mind.
“Ever since I was young…” Micah screwed up his face, frowning deeply as if lost in thought and unsure how to continue. “I should have told you sooner. But I was afraid. This thing inside me, Eden, it’s born of disease and darkness. I’ve had it ever since I was young. I can feel other people’s emotions. Feel them without having to be told. Like they’re inside my head, and I can barely shut them up. I’ve learned to control it, to block the emotions out. And for the longest time, I thought that was enough.
Are you excited to grab your copy?   Order today so it will be automatically delivered to your kindle tomorrow!
#TeaserTuesday