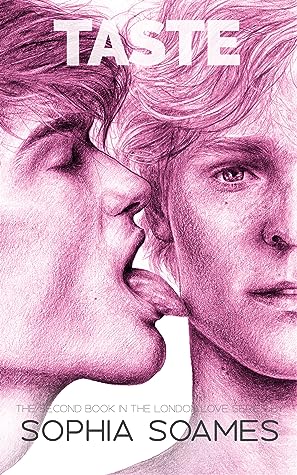 Today marks the end of the Sophia Soames' London Love reviews with her latest release: Taste. Can Finn and Mark fit their broken pieces together or with their sharp edges prove to be their undoing?

Finn Christensen doesn’t do feelings. He doesn’t do relationships. When he has an itch to scratch, there are always clubs and hook-ups. Quick, dirty encounters in dark places that feed the need that brews in the pit in his stomach. He works every hour of the day as the front office manager for the Clouds Westminster Hotel in central London. He’s a good boss, and he knows his shit.

Then Mark Quinton swans in like he owns the bloody place, and Finn’s carefully managed world starts to fall apart.

Mark Quinton is impulsive and stupid and childish. He’s the last person in the world who should be allowed to run the food and beverage department at the Clouds Westminster, however many brilliant ideas he has and somehow miraculously pulls off. He needs…something. He needs Finn Christensen.

It’s a match made in hell. A recipe for disaster. There will be a bloodbath one day. They both know that. Everyone knows.

TASTE is the second book in the London Love series, following four extraordinary ordinary couples living real fairy-tales in the city of London. TASTE is a hurt comfort, enemy to lovers romance set behind the scenes in a busy inner city business hotel. The books are all Standalone and can be read in any order, apart from EXHALE which is best enjoyed after BREATHE.

Sophia Soames pulls you into this novel from the jump, starting with a prologue that makes you raise your eyebrow and desperately seek out the answers of how Mark and Finn got to that point and how they could possibly move forward from there. There is so much emotion in just the prologue that I knew this would be a five star read immediately - and I was so glad that Soames did not prove me wrong.

After the prologue, we travel back six months in time and venture through the story of Finn, a hard nosed and hard edged manager at the Clouds Hotel in London, and Mark, a flamboyantly broken restaurant manager at the same locale. The two men clash from the word go, but you can feel that there is something else simmering beneath the surface, desperate to break through.

This book exemplifies the enemies to lovers trope, building a tension between the two men that rings incredibly true, even with the underlying desperation and yearning for one another. The angst levels can be rather high at times, but they never overwhelm the rest of the story. And it is a beautifully written story, one that made it damn near impossible for me to put down.

The characters are wonderfully written though at times I had a bit of a love/hate relationship with them. I don't think I would've had nearly the same level of connection with either MCs, especially Finn (who ended up being my favorite in a twist that surprises zero people who know me or my favorite character archetypes) had this been a single POV. Instead, Soames masterfully perfects the dual POV challenge and provides distinct voices and insight into both of these beautifully broken men.

And the side characters? Once again, Soames has built a cast to perfection. Even the characters who appear only for a few pages, like a particular restaurant customer who would honestly rather be home watching EastEnders, makes an impression on the story and the reader. There is a found family feel to the hotel employees and I am absolutely weak for the found family trope, so she had that going for her immediately.

This book can be read as a standalone and is barely connected to the first book with the exception of setting and passing mention of one of the siblings from the first book.