Taken By Chance by Isla Olsen 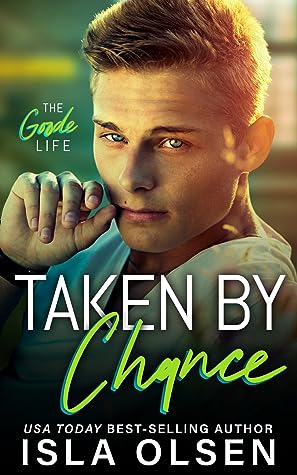 After some delay, Isla Olsen's Taken By Chance is finally here and let me tell you, it is worth the wait!

There are certain rules of friendship that are pretty much written in stone:

Helping your buddy’s kid brother lose his virginity?…yeah, that’s not on the list.

It starts as a simple favor. Now that he’s home from college, my best friend’s brother Tucker needs a place to stay and I happen to have a spare room.

Then it becomes a confession. Tucker tells me he’s a virgin. And he’s on a mission to swipe that V card once and for all.

Ultimately, it turns into a challenge. While Tucker searches for the perfect guy to pop his cherry, I find myself growing more and more agitated with the situation.

I know why, of course. He’s my best friend’s brother, a kid I’ve watched grow up; it’s perfectly normal for me to want to protect him from all the assholes and users targeting him via his way-too-many dating apps.

It has nothing to do with the strange way my stomach seems to flip at the sight of his smile, or that the sound of his voice somehow makes me tingly all over. Or that I can’t seem to stop thinking about what it would be like to run my hands over his body.

Come visit Finchley, CA, where the sun’s always shining, the locals are always gossiping, and you won’t walk two steps without bumping into a member of the Goode family. If you’re lucky, you might find gold; or, even better…true love.

I went into Taken By Chance with the same high expectations I go into every Isla Olsen book with and I was so pleased to not be disappointed. She once again delivers a hilarious and steamy low angst love story that had me unable to tear my eyes from the page and smiling when the book was over.

Taken By Chance is the story of Finchley, California's town lawyer, Chance, and his best friend's little brother, Tucker Goode. Chance is straight. He has never questioned this. He has never been attracted to another man. Then his best friend's little brother, Tucker, moves in with him now that his former roommate, Lawson, has moved out. When he finds out that Tucker is on a quest to lose his virginity, he finds himself strangely uneasy with it - especially as he starts to notice Tucker in a more, shall we say <i>adult</i> manner.

However, this is not a bisexual awakening story, because Chance never identifies as anything other than straight. He just happens to fall in love with a man. Tucker and Chance's story is absolutely adorable, filled with the same heat and humor I've come to expect from this author. The town of Finchley is once more filled with colorful characters and Facebook interactions that have me rolling. Both of our main characters are incredibly well developed as are the side characters we've come to know throughout the series. We get great updates on the couples from the first three Goode Life novels, but the book can easily be read as a standalone.

It is incredibly low angst and starts out in a manner that pulls you in immediately and makes you wonder how the hell Tucker and Chance got into that situation in the first place. I would've personally loved to see how they got out of it, rather than a passing reference of the opening situation closer to the end of the book, but that is honestly my only complaint with the book.

Well that and the fact that it ended and I had to re-enter the real world and leave behind the colorful warmth of Finchley, California and the hilarous people who live there. (Also I believe I've possibly identified the next two books of the series...)

I love a good best friend's brother or brother's best friend trope and it's even better when the town of Finchly is involved!  What I love too is that this is a relationship between two people that evolves throughout the course of the story and isn't weighed down by discussions of Kinsey scales or mass introspection, it just is...

This story is low angst with good heat building from beginning to end and it's done in a way that feels natural to the characters.  What that means is that there's room to get updates on the rest of the Goode relationships and do a little forecasting about what might be to come...

Taken By Chance was worth the wait, but I have to warn Isla Olsen that I'm ready for the next book in the Goode Life series already...

This was a lot of fun. Tucker is newly back in town and looking for a guy to take his virginity. Chance is Tucker's brother's best friend and gives Tucker a place to stay.

Tucker has always had a crush on Chance but doesn't act on it because Chance is straight.

While Tucker starts going on dates looking for a guy, Chance realises he feels something for Tucker and they start a relationship.

They start out slow and I loved the discovery Chance went through. He's straight, just happens to love a man. There's zero angst about that.

A good about of steams. A decent amount of shenanigans from the residents of the town and a brief catch up with the other couples too

Great best friends brother, bi awakening, nosy small town story!
I loved Chance and Tucker, they were so good together.  Chance is Tuckers older brother’s best friend, and they happen to be twelve years apart.  When Tucker returns to his small home town after college he’s staying with his parents, but soon realizes he needs his own space.  Conveniently, Chance’s roommate just moved out.
I appreciated the relatively easy acceptance Chance has with the fact that he’s attracted to Tucker.  The relationship that develops between them is just lovely.
Heat: 7/10 (spicy but not over the top. Just enough to develop the story)
Character development: 8/10 (both main characters are well-developed)
Pace: 9/10 (well done, this story didn’t seem to rush or drag in any specific area)
Overall: 10/10 (would highly recommend)
Red's Book Reads:
This book is the perfect combination of my favourite tropes and I was hooked from the start.
Tucker has a crush on his soon to be roommate who happens to be his brothers best friend who is 12 years older and straight - or is he? I loved the way the relationship between Tucker and Chance developed and how cute they were together. I haven’t read the other books in this series yet as they can each be read as stand-alone stories but I will definitely be adding these to my TBR list as I loved reading about the Goode brothers. I have read another series by this author which was also amazing and Isla Olsen is fast becoming one of my favourite authors. I 100% recommended this book if you are looking for a sweet, feel-good, low angst story with a HEA
Rating: 5 Stars
5 Stars Friends to Lovers Heather Jacquie low angst Reds Book Reads Sarah C Series