Sexted by Santa: A Thrust Into Love Romance by DJ Jamison

Christian Kringle hates the holiday season. His neighbour, Jaxson Hicks and his daughter Tori are the opposite. Can they change the mind of the grumpy scrooge next door when Jaxson and Christian match on a dating app?  Who can resist being Sexted By Santa?  Especially when he looks like the guy on the cover...Hello Santa! 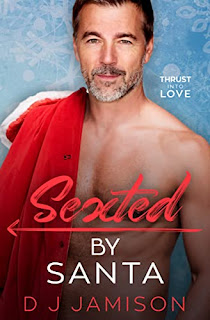 Christian Kringle: College professor, reluctant Santa, and...fake dating my neighbor?
I'm a grinch and proud of it--but this year, there’s no avoiding the Christmas cheer.
First, I get roped into playing Santa. Shudder. Then, while trying to dodge a setup with my boss's brother, I somehow promise to attend a holiday party with my boyfriend--who doesn't exist.
Next thing I know, my (soon-to-be former) best friend has set up a profile on a hookup app to find me a date. With the username of....wait for it...SantaWantsYourChimney.
Go ahead and laugh. He sure did, the traitor.
Before I can delete the profile, I match with an easygoing guy with amazing photos. His teasing about Santa kink makes me laugh, and blush, and feel things I haven't since my divorce. For the first time in years, I look forward to dating.
Until we meet, and he turns out to be my neighbor. My very young, very off-limits neighbor who I've clashed with for years. Only now I know just how sexy, charming, and sweetly devoted to his daughter he is.
I should walk away, but I still need that fake boyfriend. The only problem? Jaxson's so convincing I can't tell where the pretense ends and real feelings begin.
Falling for him is easy. Loving his daughter? Effortless. Trusting that I can keep them is the hard part.
It'll take the magic of love, family, and yes--even Christmas--to teach this old grinch new tricks.
Sexted By Santa is a standalone holiday romance set in the Thrust Into Love universe.
Heather's Review:
Sexted By Santa was such a fun read... the grinchy Christian Kringle started thawing his frozen heart fairly early in the story, making it easy to like him as a person... DJ Jamison was able to convey the hurt he felt rather than an overt meanness... which helped me like him even more...
Jaxson wasn't the sunny, young twink that you might expect Santa to look for, and I appreciated that, while youger, he was responsible, grounded and even a little overprotective as a dad...
I love the duality of being barely speaking neighbours, hot sexting buddies and eventually friends before really getting into a relationship... and on top of everything else, this book made me smile, over and over again!
If you're looking for a steamy, quirky holiday romance with characters who are sometimes their own worst enemies, and a cast of fun side characters including Sir Elton John, Tori and Aunt Henry... than you need to read Sexted By Santa!
Red's Book Reads Review:
I loved this book! Christian had been hurt in the past and found that bad things always tend to happen round the holiday season. Jaxson has a young daughter who adores decorating and glitter and sparkles so loves Christmas. When Christian needs a date for a holiday party he goes looking on a dating app and connects with a faceless stranger and starts chatting. When finally meeting in person, he discovers it to be his neighbour.
The relationship that develops between the two is so sweet and I adored how they balanced each other out. I also loved Tori as she was so determined and sure of herself..Sexted By Santa is a really enjoyable holiday read and I didn't want to put it down!
Tammy's Review: (4 stars)

This is a enemies to lovers sweet holiday romance with some angst and a cute little girl.

I enjoyed the relationship development between Christian and Jackson through the book. Christian definitely starts out as a Grinchy bahumbugger (I don’t think that’ll a word, but you get my meaning) but is finally able to open his heart by the end.

Jackson and Tori are a sweet addition to this book. I enjoyed Jackson’s character as a single father and 100% dedicated to his daughter. It was a slow build up for him and Christian to connect and let each other in both had their own relationship drawbacks and concerns.

I generally don’t read a lot of books with children in them. It’s not some thing I avoid on a conscious level but I just tend to not pick them up as frequently as others. They enjoyed the depth little Tori added to the story.

Overall I enjoyed it and would recommend for a holiday read.

Heat 6/10 (good heat once they get there, but not a main focus of the story)

Believability: 8/10 (I generally have a hard time believing people who strongly dislike each other can fall in love, but this one was believable for me so kudos to the author!)