Princess: A Dark MM Romance by Daniel May 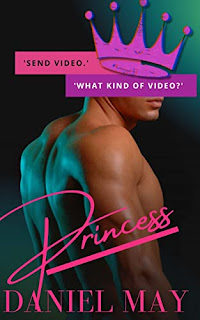 ‘You’re a piece of meat, and you need to learn to act like it.’
West Song is an actor on the verge of his big break, constantly at the gym and on his grind. He’s resolute; his hard work and immaculate pecs are going to carry him to success. No matter what.
West’s new manager is equally invested in his career. Ellis Hui also thinks West has potential, but has a radically different vision for his future.
A future that involves lipstick, heels, and complete submission.
Princess is a dark contemporary MM story with a mind-break happy ending. At 47k words it can be read as a standalone. Detailed trigger warning contained in the foreword.
Content Warnings: "Princess contains exceptionally dubious consent, mind-break, blackmail, rough handling, extreme dom/sub dynamics, and emotional and psychological abuse.
Possible triggers include: forced feminization, bimbofication, misogynistic language intended to demean, forced crossdressing, forced orgasm and orgasm denial, intense nipple play, mis-gendering terminology intended to demean, male anatomy referred to with feminine gendered language including ‘tits’ and ‘pussy’, and threatened rape."
Jacquie's Review:
I enjoyed this more than I thought I would, quickly becoming absorbed in the story.
That's not to say there isn't content that people won't like so please pay attention to the content warnings.
It's very dark and disturbing. Mostly psychological and that's what's so pervasive  about it. Ellis strips West's identity so he can reform him.
To me it counts as a romantic obsession not a romance by I loved that about it. Ellis cares for West in his own way, quickly taking over every aspect of his life.
There's a lot of sexual content though very few encounters with the 2 MC's, with the imbalance in power this is fitting.
Princess is one book that will sit on my mind for a while.
Rating: 5 Stars
Heather's Review:
If you like a book where you have no idea why or how, but want to keep going than Princess is probably the book for you.  Even knowing everything in the content warnings didn't prepare me for the way you are sucked into West's world.
I agree with Jacquie that this book teeters perilously on the romantic obsession line and I think that's honestly part of the mind-fuck! If you want simple, sweet and straightforward, please pass this book by... but if you want to explore obsession, blind submission and what some might say is an unhealthy dose of kink, than this is the book for you!
Rating: 5 Stars
5 Stars BDSM DubCon Erotic Romance Heather Jacquie Psychological Trigger Warning