on November 07, 2021
S. Rodman is a new to me author, but it most certainly won't be the last time I enjoy their works.  I cannot praise Omega Alone enough it was something I never knew I needed but so glad I had."
From the Blurb: 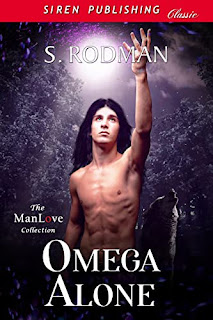 Erik is the Alpha of a small happy pack. One night whilst negotiating a treaty, an omega is dragged into the room. Erik is stunned by his beauty, his scent, and immediately fills with desire to protect the little omega, keep him safe and make him smile.
Buying the omega is the easy part. Getting the scared and damaged omega to trust him is going to be hard. Especially when Erik accidentally triggers Luca’s heat on their very first night.
Luca is a hated half breed. His father a human mage. His mother a captured shifter. Luca longs to be human and no longer despised. He knows nothing of shifters, or omegas and alphas. Luca believes he is imprisoned by animals who want him dead. He has no idea why he is suddenly full of unbearable arousal and he has no idea what to do about it.
CrazyPinkIrish's Review:
Luca is such an in depth character with many facets but he has a heartbreaking journey. I loved witnessing his progression from scared little omega into a wonderfully rich man who can stand on his own two feet.
Erik was rather polarising for me and frustrated me with his arrogance. He does filter out many of the issues I had with him and comes bursting through with everything that Luca needs and wants.
One of my favourite stories I have had the pleasure of reading this year and I am glad to of discovered this author.
Omega Alone itself was incredibly rich and a well developed tale with fantastic characters and I am intrigued to see more from this engaging story.
Tammy's Review:

This is the second book I’ve read by this author and I do enjoy their stories. But I do think this author could use a good editor and a couple beta readers. Which is odd since it looks like the books are traditionally published by Siren Publishing. The story is good, but would definitely benefit from additional development in the story line and characters.

Luca is the bastard son of a powerful mage and shunned and abused by everyone in his life. He starts out as a bit of a spoiled rich jerk. Eventually, he figures out everyone isn’t trying to kill him and settles in a bit.

Erik is a good balance for Luca, although I found his character a little bit underdeveloped. He is a good alpha for his pack but there isn’t a lot of pack dynamics developed in the story.

For a story that’s relatively short at only 41k words, it’s a quick and entertaining read. A bit bumpy, and definitely could have been further developed for a more complete and more enjoyable reading experience.

Writing: 6/10 (The author seems to be in need of a skilled alpha or beta reader to further develop their storylines and characters)

Editing: 5/10 (I found several obvious typos and errors that should have been easily caught by a skilled editor)