Beth Bolden's Merry Elf-ing Christmas was exactly what you'd expect from a story with that title... a grumpy elf, a sunny human and a Santa named Sam... 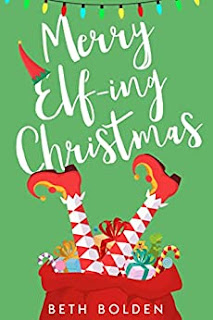 Aidan might be a bad elf, but he’s never been naughty.
Aidan has always landed on Santa’s nice list, thank you very much. But that doesn’t mean he’s cut out to be a North Pole elf; instead of worrying about the dwindling magic of Christmas, he’d much rather be back in Tir na Nog, calculating where the next end of the rainbow is going to land.
Instead he’s freezing his butt off in Santa’s sleigh.
His situation seems grim despite all the decking the halls, until on Christmas Eve, during a milk and cookies run, he meets Dexter, an engineering student.
They couldn’t be more different, and Dexter couldn’t be more forbidden, but Aidan is drawn to the handsome human anyway. Over the next year, their emails start out as a entertaining way to pass the time in all his interminable elf meetings, but soon, hearing from Dex becomes the very best part of his day.
And when they meet up on the next Christmas Eve? Aidan and Dex discover that their infatuation is so much more than just attraction. If they believe in each other and in the love they share, together their magic might be powerful enough to save Christmas.
Red's Book Reads Review:
Aidan is a leprechaun who is prophesied to save Christmas. Dexter is an engineering student who works in a convenience store. It is unlikely the two would ever meet but when they do, it’s more than the sleigh that flies!
I loved Aidan and Dexter. They were such a cute couple. I also loved how they weren’t the biggest fans of Christmas but they worked together to capture and keep the magic of the season. Merry Elf-ing Christmas was different to the usual holiday reads but I am all for it!
Rating: 4.5 Stars
Heather's Review:
I love that so much of the relationship takes place via email.  They can't even exchange pictures or video chat, so relying on the written word documents the first year of their relationship... I like too, that Aiden the elf is not the sunny side of the relationship - so much of the hope and belief comes from Dexter, the human.
This is a well crafted and sweet holiday read with good flow, adorable characters and a North Pole re-imagined... If you're looking for a mostly sweet, fluffy long distance relationship with just a pinch of angst and a little more than a pinch of Holiday Magic, you should add Merry Elf-ing Christmas to your TBR
Rating: 5 Stars
4.5 stars 5 Stars Christmas Contemporary Fantasy Heather holiday Reds Book Reads