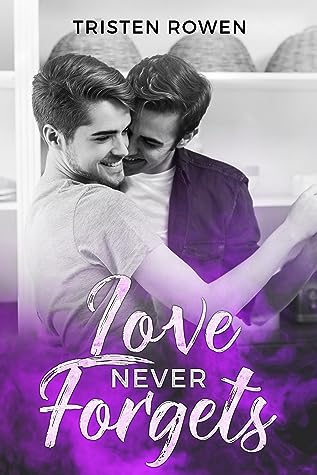 "As the song played, I envisioned Terry and I dancing. I ccould still feel him in my arms. I could smell his scent."

There are books that, months later, you see mentioned and you remember the way they made you feel. Tristen Rowen gives us that experience with Love Never Forgets, a love story that spans decades and shows how resilient true love can be.

Finding love is hard, falling in love is easy, and forgetting the love of your life is unimaginable.

When Scott Prescott makes that midnight trip to Vermont in 1990, he gives up everything and has no regrets.

Ten years earlier, Scott is nothing more than a spoiled brat. The last thing he ever wants to do is spend the entire summer of his eighteenth year in the boonies of Vermont, all because of some silly promise his dad made to his best friend when they were kids.

Stuck out in a country inn, missing his home in Boston, Scott is determined to be miserable until he catches the eye of Terry Lachance, the inn owner's twenty-year-old son. Outgoing, eternally optimistic and tenacious, Terry is driven to break through Scott's walls, and he succeeds in only a day.

Faced with personal and societal challenges of the time, Terry is nevertheless convinced Scott will make the "right decision." there is no telling if their love is strong enough to withstand it all.

This is a new to me author, but boy am I happy to discover Tristen. The story is well crafted and anout 2/3 we get skipps in time to accomodate the whole story. I loved how emotive and true this story was written. It is about first true love between Scott and Terry. Losing that love due to interfering family. Finding it again as adults, and later on with love for their children. And the last part: still loving eachother while Terry starts to realise he is losing himself to early onset Alzheimer's and how Scott and the childeren life with losing their so much loved partner and father - and when to let go. This book does not have a hea as such but I foubd Scott and Terry had that after finding their way back to eachother

This book is more than a romance novel. It spans forty years in this couple's life, starting with how they first meet and fall in love and ending with the heartbreak and devastation that illness can bring on a family. The book moved me. It made me laugh and it made me want to cry.

This book centers around Scott and Terry. We first meet them when Scott is 18 and Terry is 20, back in 1980. They fall in love over the summer only to be torn apart in a way that offers the first devastation of the book. But of course, that is only the beginning. From there, we jump ten years into the future. We learn who those boys have become and we get to watch them reconnect before jumping again into the future and seeing the way that illness tears them apart.

I think what Tristen did best in this story, besides showing us a believable couple that slip under one another's skins and straight into their hearts, building the kind of love that happens only once in a lifetime, was the portrayal of illness. Not just on the person that is sick but on the family and the caregivers. The entire back portion of the book, when Terry is getting sicker and sicker, is a struggle to read because of how REAL the emotions are.

And that struggle ultimately makes the book worth it. It may be a heavy read, but its a beautiful one. Terry and Scott and their love story will stay with me and I will be revisiting.