Last First Kiss sucked me in and held my attention from beginning to end - from the twist at the start to the end of the book - I was hooked... 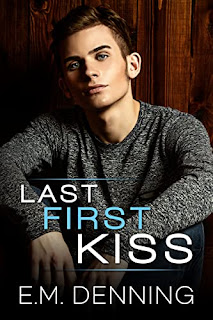 The only thing worse than having your heart broken is going home and having nothing to show for it.

Which is exactly the situation Logan Hanson finds himself in. Worse than that, his hometown isn’t exactly glad to have him back. He’s jobless, friendless and things are looking pretty bleak… until his dad’s best friend, Ezra, throws him a lifeline.

Small town life has always suited Ezra Black just fine, but it hurts him to see Logan struggle to re-adjust. Ezra has always been an out and proud bisexual, but small town gossip about his best friend's son has him wondering if he’s as accepted as he thought.

Ezra offers Logan a job, hoping that the people of the town will get over themselves and see Logan for what he is, a young man who wants a chance to start over and fit in. The more time they spend together, the closer they grow, and all it takes is one kiss for everything between them to change.

Their relationship is new, but is it strong enough to overcome small town gossip, an angry friend, and father who doesn’t understand their love? All Ezra wants is for Logan to be his last first kiss, but can that be enough?

Last First Kiss is another hit for me!  I honestly love how strong and decisive Logan is at the beginning of the book... and it totally sets the tone for the entire book.  Ezra also makes me smile - he has an attitude that just screams confidence in so many things... and I love them both for it... I love that both characters have some angst, but it doesn't consume them or change who they are at the core.

If you read the blurb, you will honestly get the story in a nutshell... it is exactly as advertised and so well written to boot!   The scenes, the settings, the characters are something I'm sure EM Denning sweated over, but in the final product, the story reads effortlessly and that means that once you start you won't want to put it down.

If you're looking for a well written May/December Romance with a little voluntary forced proximity and two strong characters who know what they want, then you'll enjoy Last First Kiss as much as I did.