on November 01, 2021
Heather loves a good knotty book and Alex Silver definitely delivers with suspension and predicament bondage between a daddy and a bratty boy!  Red's Book Reads looks for relationship dynamics in her reads and once again Knotty Boy delivers there too!
From the Blurb: 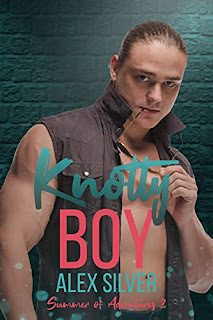 I've always wanted a daddy to love me, even at my naughtiest. My reputation as a brat is one I've earned, but I wish it wouldn't scare away all my potential partners before they get to know me. I am so much more than my lack of impulse control, if only someone would stick around for longer than a scene or two.
Luke is the first person I've played with in a while who can handle me at my worst. He gets me in a way most doms don't bother trying. The only problem is, he's my best friend's brother.
With my track record, it's only a matter of time before I scare Luke away. And when the inevitable happens, I don't want to put Tate in the middle of my drama. Is it really worth risking my closest friendship for a chance at everything I've ever wanted?
Knotty Boy is a kinky M/M romance between Monty, a pudgy brat with ADHD and Luke, a rope bondage expert and daddy dom who is used to taking charge. The book contains BDSM elements including spanking, rope bondage, suspension bondage, and daddy kink. It's part of the series Summer of Adventures, but it can stand alone.
Red's Book Reads Review:
Knotty Boy was such fun and I loved the dynamic between Monty and Luke. It was great to see such a positive representation of Monty’s ADHD as well and Luke’s calm understanding of how best to deal with the issues it can cause. I adored how sweet Monty was and his interactions with his friends and chosen family. I also loved the backstory with Luke and it did make me giggle as I read it.  The whole story was so well written and I didn’t want to put it down once I started. I also really liked how the rope scenes were written and that all the safety elements were included.
Rating: 5 Stars
Heather's Review:
Knotty Boy gave me lots of good feels, particularly in how Luke approaches Monty's ADHD and his 'brattiness' that has often been a deal breaker for Monty's previous play partners.  I also like how the author focused on Consent, Care and Risk Awareness within the story.  Luke didn't just jump into tying up Monty, but went through a full RACK discussion,,,
The Daddy/Little dynamic was explored on a more surface level, but I honestly found this refreshing.  There was always a Daddy/Boy dynamic, but the age regression was not as large a factor in this book.
Like Red, I read this book cover to cover in one sitting and really enjoyed the entire story and dynamic at work.  It was low angst, with good steam and a happy daddy/boy outcome!  I have read the series that spawned this one, but not the first book in this series and can happily report that Knotty Boy easily stands up as a standalone, so you can dive right in!
5 Stars Age Play ARC BDSM Bondage Daddy Heather Reds Book Reads Series