Just Want More by Evelyn Jeannie Hall is definitely a bi-awakening grumpy/sunshine story with building heat and some sweet side characters. 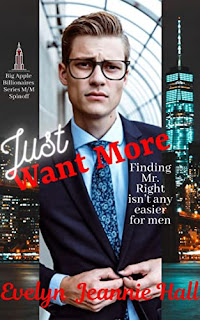 An M/M Romance Spinoff to the Big Apple Billionaire Series!
To Rookie Wagner, the freshly promoted CPA at the most prestigious up-and-coming banking firm in Manhattan, his professional life is exceptional. Fabulous bosses. Fabulous pay. And a fabulous work environment.
At least until newly hired investment banker Tobias Ellis saunters into the Friday morning meeting.
Despite being from Canada—Canadians are super nice, right?—Tobias is arrogant, pushy, and so full of himself he won’t speak to anyone who’s not a founding partner. Still, as the firm’s unofficial goodwill ambassador, Rookie sets out to welcome the muscle-bound and scorching hot Tobias.
Only to get the door slammed in his face.
Deciding to give the pompous newbie a wide berth is a no brainer. But then Rookie witnesses Mr. Aloof being ejected from a bar. Taking pity on the big jerk, Rookie takes him home, only to have Tobias hit on him in a big—in every sense of the word—way.
The next morning goes poorly, as does the next couple of weeks. But now when Rookie glances toward Tobias, it’s to catch Tobias already looking at him.
As annoyed as Rookie feels about that night—and about Tobias in general—he can’t help feeling intrigued by this guy, who clearly isn’t as straight as he wants everyone to think he is.
When he attempts to befriend Tobias, the banked fire he sees behind his eyes ignites. The only question is if Rookie will be able to avoid getting burned by those flames.
WARNING: the story contains drunk and disorderly former hockey players, bi awakenings, a grumpy guy in denial, and lots of hot gay office sex.
Heather's Review:
Just Want More had so many great elements of bisexual awakening buried under a homophobic upbringing and a need to please... both characters were likeable and well developed and the side characters were fun and supportive... but, the timeline was choppy and there were what felt like huge time jumps spanning from May to Christmas that made me feel like the story was chopped up too... For me flow is probably the most important thing in a story and this one kept making me stop and check that I hadn't missed a chapter.  This book had encounters than skip days or weeks before picking up the storyline and it felt like there could have been so much more and so much better flow if the book had just taken place over a few months instead of more than half a year.
I honestly would love to see this author write more M/M romance and find their rhythm!  This book could be amazing if it was tightened up and the flow was consistant!
Rating 3.5 Stars
3.5 stars ARC bi awakening Grumpy/Sunshine Heather