“Come here.” Dan held out a hand. Micky, forgetting for a moment who he was—who he was meant to be—snuggled into the duvet and Dan wrapped an arm around him. Turning onto their sides, they faced each other. Micky couldn’t close his eyes. He quite liked the view he had, so he stayed that way for a while, studying Dan in the dusky light. 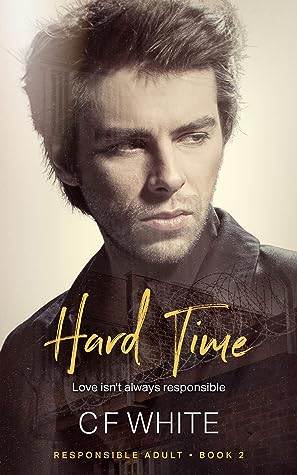 After Micky O’Neill is remanded in custody for breaching his court order, his already tempestuous relationship with Dan Peters is tested to the limits.

Having to battle their way through a court case that could end with Micky in jail, social workers breaking up the family home, and the return of Micky’s deadbeat father, it seems everything is set to destroy their relationship before it even had the chance to start.

With such high stakes involved, not just for Micky but for once-burned, twice-shy Dan, they both have to learn that falling in love isn’t always responsible.

This is the second book in the re released Responsible Adult Series. It has been edited with new content added to make for a new reader experience.

Author, C.F. White did an excellent job in creating this totally believable story where you sometimes just want to shake up characters and institutions to help out and open their eyes.

It is gritty, but friendship and love shine through.

Micky is up against it due to his family history and where he was born and 'raised'. He tries to leave the past behind and create a better life for himself and his little brother Flynn , who has Williams syndrome, and does not see the world as we see it, for who he is responsible. Dan is a man who got an English degree and wants to be a teacher, but for convenience is still working in a posh supermarket as a section manager. This is when Micky and Dan meet.

This book continues the story and finds Mickey in a difficult situation both in regards to where his live is headed and in relation to the care for Flynn, will he lose him as well?

I highly recommend these e-books/audiobooks , if I could give more stars I would happily do so. This is one of the best series I have read and listened to in a while.