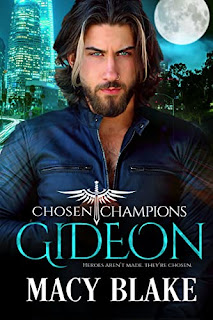 Gideon is a centuries-old vampire warrior with a broken heart...
Which is why he’s vowed never to risk it again. Instead, he’s channeled his passion and his legendary self-control into becoming a skilled protector -- one who’s promised to wield his sword alongside a young wolf shifter leader on a mission from the mysterious Oracle to protect the human realm against the broken magic that threatens its very existence. He’s doing just fine without love, thank you very much… at least until his incubus ex reappears in his life.
Taj is an incubus without a home…
And that is every bit as unpleasant as it sounds. Banished to the human realm, Taj is learning the hard way that survival is for the fittest and, um… he’s not as fit as he thought he was. Not when his past keeps coming back to haunt him. Still, it’s only when another incubus is involved in a series of brutal attacks and Taj’s ex, Gideon, rides to the rescue that Taj learns just how dangerous this human realm might be to his life... and to his heart.
But although the fire between Gideon and Taj burns hotter than ever, they’ll need to break through the wall of secrets that divides them if they want a chance to set things right...
A second chance for the human realm.
A second chance at finding a home in the welcoming arms of their new pack.
And a second chance at building a future… together.

I absolutely LOVED this book - freakin' awesome !! Both characters are adorable - Taj doing the best he can and Gideon trying to be the stoic, unflappable sort - he's anything but !! And love the rest of the group are still included! There's friendship, made family, 2nd chances, action/suspense, funny moments & romance....great continuation of the series. There are new characters introduced as well and they are a hoot !! Enjoy !!   Gideon should not be read as a standalone, you should start with Logan or the Chosen Universe Series