R Cayden writes amazing characters. Every book I've read by this author has proven it and yet, I am always surprised by how much I fall in love with the characters in their books. Filthy Bromance was no different. 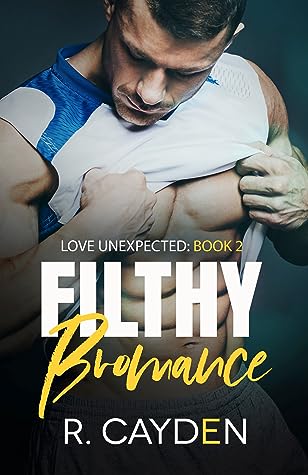 It’s totally normal for two straight guys to do this when they’re alone, right?

That’s what I keep telling myself after I meet Reggie.

I’m a pro tennis player, and I usually spend my life on the court. But an embarrassing injury in the middle of the US Open sidelined my career, landing me in the hands of my new athletic trainer.

Reggie is a big old jock with an easy smile, and my grumpy butt has never met anyone like him.

We start hanging—at the gym and at his place, on the tennis court and out at the bar.

I haven’t had a real friend in years, and Reggie’s big heart warms me deep inside.
He finds something I’ve tried to keep buried, and when we end up sweaty in a hotel bed one night, my world turns upside down.

Then comes the cabin weekend, and all the long massages at the gym…
Reggie gets his big hands all over me, and I can’t stop thinking about him.

It’s chill, though, because we’re a couple of straight guys, and this is just a bromance.

It can’t be more than that, not with my tennis career waiting— and no matter what my heart insists.

Filthy Bromance is a friends-to-lovers romance with a grumpy tennis star, his big-hearted athletic trainer, and a mess of unexpected feelings. It features dirty talk and exploration on the way to a well-earned HEA. Book two of Love Unexpected, it can be enjoyed as a standalone or read along with the series.

Everett is a tennis player who was injured during the US Open. He got ahead of himself, started to gloat, and literally fell down and broke his ass. Reggie is a personal trainer and the brother of Owen, one of the MCs from the first book. He's incredibly large and people tend to view him as intimidating when in reality? Reggie is a giant teddy bear. Like I wanted to give him hugs. Every single thing about that character made me feel warm and safe and I just loved him, okay?

Both men identify as straight at the beginning of the novel, but neither are able to deny the attraction they feel for one another. They try though, especially Everett who is a little emotionally constipated. Its fun to read the process of Everett clearing out his emotional constipation and coming to terms with his attraction to Reggie. Reggie's journey is a lot less complex, because he's very open emotionally. Actually, he's very open in all ways. He's incredibly honest, communicative, and wears his heart on his sleeve.

Because of Reggie's temperament, it means the couple in this book have damn good communication. Reggie won't allow anything else and I love that. I hate when the conflicts in books could be solved by a quick conversation that is just avoided over and over again until feelings are hurt and intentions are misunderstood.

As always R Cayden has great side characters as well. Everyone from Everett's ex friends with benefits, Luna, to the MCs from book one, Fox and Owen, comes off the page as fully formed. There is not a character that feels like they fell flat in creation and each one adds something to the colors and layers of the book without overshadowing our mains.

And of course, as its an R Cayden novel, expect some great steamy scenes. Expect a lot of tooth rotting fluff. There is a bit more angst in this book than is typical of R Cayden's other novels, but that worked really well for me because I love a bit of angst under my fluffy bits.

All in all, this book was amazing and I loved it and I'm already anxiously awaiting book three of the series - if there is such a book in the works.

Warning: This book contains references of past homophobia and some internalized homophobia as well.

I'm all for bi-awakenings, especially when both MC's identify as straight before they meet each other... and I especially love that R. Cayden takes such a contrasting journey with the main characters in Filthy Bromance - Everett, with his internalized homophobia brought on by a controlling and homophobic childhood and Reggie, whose brother and best friend are in a relationship, is more accepting, but less aware of his own feelings...

R. Cayden always delivers a well rounded story with excellent world building and believable side characters - and this time, I think my favourite is Everett's sort-of ex hook-up and new confidante, who helps him navigate his feelings and acts as a sounding board!

There is definitely more angst in this book than the first one in the series, but that's because the characters need to wrap their heads around the new to them reality of falling for a man...

If you like a good bromance story, than you'll love Filthy Bromance and even if you aren't sure, I'm still going to tell you to add it to your tbr - it's just that good!

Everett is a tennis pro who was injured in his last match and he goes to Reggie for athletic training to help his recovery. Both men are straight - or are they? This is such a good story! I loved Reggie and Everett and they were just so much fun! This is a proper friends to lovers bi-awakening with a real feel good factor. I loved how the romance between the two developed and I also adored the cameos from Owen and Fox (from Filthy Cute). This can be read as a stand-alone though and you don’t need to have read Filthy Cute first. Reggie is such a teddy bear of a man and it is lovely that he gets his HEA.