“His eyes were something he didn’t show everyone.  But they were infinitely warm, hiding universes of secrets….”

From the Faces Blurb: 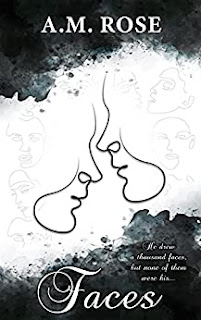 He drew a thousand faces, but none of them were his…
His whole life, the one thing Dorian wanted more than anything else, was to know who his soulmate was. But while he can find everyone else’s soulmate, he can’t do the same for himself.
Resigned to a life of solitude, he spends his days giving people the key to their happiness, borrowing their joy and basking in the beauty of their love. It’s enough…
Until he meets Hayden.
Hayden, who is everything Dorian had ever dreamed of.
Hayden, who cares for Dorian the same way Dorian cares for him.
Hayden, who doesn’t believe in soulmates.

Faces has a modern world setting with an individual who is The Artist.  You would go to see them to find out who is your soulmate.  This book is about said artist and another who does NOT believe in the soulmate picture.  This story is intense with feelings – told from both POV’s, we get to see how & why and then watch as they fall in love. It’s heartwarming and heart-wrenching, fast slow-burn (you’ll get what I mean when you read it !!) and utterly beautiful !! And that ending….you’ll be smiling through your tears.

Faces was a short read but I enjoyed it.

Dorian is The Artist, the one person chosen by fate to draw other peoples soul mates. Hayden doesn’t believe in soul mates and has no interest in finding his. This story is what happens when two opposite ends meet. Dorian was really sweet and I loved how strong and independent he was, despite his challenges in life. Hayden did annoy me slightly as he was very reluctant to accept a point of view other than his own. Ariel stole the show for me and I adored her and she was one of my favourite characters in this book even though she was only a side character. This book is low angst and low steam but well written and worth the read.