Catch a Tiger By the Tail by Gabbi Grey

Both Laora and Jacquie had the chance to listen to Catch a Tiger By the Tail by Gabbi Grey, a sweet and age-gap insta-love story. Check out what they had to say below: 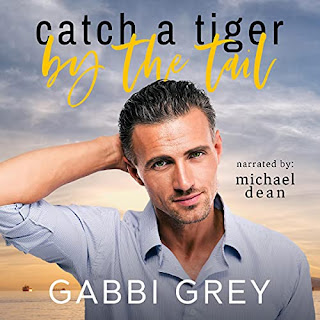 Thomas Walsh knows the number-one rule in the film industry: Don't get involved with the talent. But resisting the urge to take the big screen to the bedroom can be hell when the lead actor on the set looks good enough to eat...one slow lick at a time.

Peter Erickson's latest role as a gay man hits a little too close to home. He's still in the closet and secretly grieving the death of his lover. Then an enchanting production assistant catches his eye, and he's surprised by the instant attraction that stirs more than his wounded soul. When the two men are caught on camera in a very intimate pose, both Thomas and Peter are afraid they've caught a tiger by the tail.

This was a sweet, quick listen. Both Thomas , a PA for a studio and Peter, a popular actor have a connection. They are propelled into the limelight as a couple when a picture is taken out of context.

Both men are in the closet for their own reasons.  They find their hfn/hea.

The narration by Michael Dean was good tor this story, fast pasted.

A scoop of sweetness!

An adorable age gap, out for you, instalove story performed well by Michael Dean.

Both Peter and Thomas are in the closet and have stuff from their pasts to overcome so there's a dash of hurt comfort there.

I'd have liked a slightly longer timeline but that's just my preference and really like the MC's so it didn't matter too much.