A No-Strings Noel by Annabelle Jacobs

It is that time of year again. Time for Christmas trees, hot cocoas, and holiday themed romance novels. Annabelle Jacobs delivers an amazing holiday romance in her novel A No-Strings Noel. 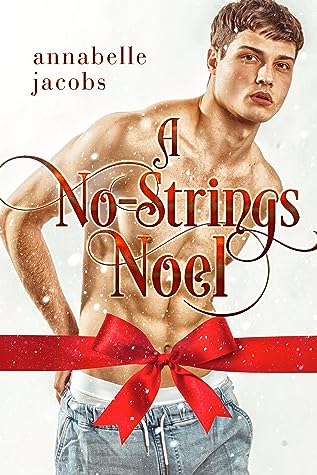 A week of no-strings fun in a winter wonderland setting. No consequences, no expectations, no hurt feelings. Right?

Finding his boyfriend in a compromising position leaves him with a week off work and no holiday to go on.
A night of vodka, ice cream, and his sister’s sympathetic ear is the only way to deal with it.
It’s also how he finds himself on holiday alone a few weeks later, at an English holiday village in the countryside, surrounded by Christmas cheer and happy families.

He’s expecting a week of relaxing days and early nights, doing his own thing, and taking some time for himself. And hopefully finding some festive spirit along the way, because it’s sorely lacking at the moment.

What he’s not expecting is Dom.

Coming to somewhere so familiar soothes his broken heart after yet another failed attempt at finding someone to settle down with. He’s ready. They never are.

Seeing a lost-looking stranger on the first day of his holiday triggers his protective instincts, so he steps in to give him some helpful advice.
Who knew that advice would mean they end up spending the day and then the whole week together? But he figures a holiday fling is exactly what he needs to get through this slump: no expectations, no misunderstandings, no heartbreak.
Or that was the plan.
He knows Henry wants more, but he doesn’t trust himself where his heart’s concerned.
He doesn’t trust Henry not to break it.

A Christmas MM romance featuring a meet-cute, a sexy holiday fling, a meddling but awesome sister, a teeny bit of angst, and a festive HEA.

I'm going to be honest: until this year, I didn't read a lot of Christmas novels. This is only the second holiday themed one that I've done and I am so glad that I did. Because Annabelle Jacobs tells an adorable story between two men who happen to be at the right place and the right time in order to find love.

Henry isn't expecting much out of his holiday. He's taking a week long trip to a holiday park, after finding his boyfriend cheating on him with their neighbor. Dom had planned this holiday trip with his ex-boyfriend, only to find himself going solo after they break up. But when Dom sees Henry looking more than a little lost at the start of the trip, he can't help going over to introduce himself. They spend a few hours together and feel an instant connection that leads to them deciding to enjoy the week - together.

Over the week, they get to know one another and slowly begin to dread the return to their realties. While I am usually hesitant in insta-love stories, this didn't feel like an insta-love. There was an instant pull to one another, but both of them acknowledged that it might not be something that would last. In fact, they were both convinced that it wouldn't last outside of the little world they'd created for themselves at the holiday park. And a vast majority of the book takes place at the holiday park - watching these two men explore that connection and get to know one another.

And the two men were delightful. I loved Dom and Henry both. I loved how they interacted. I loved the chemistry between them. The only thing that I didn't love was the fact that they didn't communicate very well. When they'd get in their heads about the week ending, I wanted to throw a snowball at them and shout at them to COMM-U-NI-CATE! Most of the final quarter angst could've been avoided by just a few simple conversations, but I guess the plot demands the lack of communication and I will just have to get over it.

But  A No-Strings Noel was easily a five star review. It was cute and light and fluffy and exactly what I would want from a holiday book. Honestly, it was kind of like a Hallmark movie on paper and I was here for it - a lot more here for it than I usually am for actual Hallmark movies.

What starts as a heart holiday fling turns into a deeper connection.

I enjoyed the romantic story development between Dom and Henry. Both are visiting a holiday vacation park for a week and a meeting on the first day when Henry is lost. They have both experienced a break up recently, Henry’s being more traumatic than Dom’s but something they connect over.

After their vacation comes to an end they both struggle to tell the other they want more. This part seemed to drag out a bit for me. They keep in contact via text message but both resist telling the other they want to continue their relationship. There was too many excuses and miscommunication in the middle for my taste, but the story was a good one overall.

I would recommend  A No-Strings Noel if you enjoy some angst in your books.

Heat: 7/10 (starts out strong with their holiday fling, nothing in the middle of the book after they leave the resort coming back together at the end)

Character development: 6/10 (there didn’t seem to be a lot of personal growth for either character, just a little bit of resistance and then giving in)

Angst: 8/10 (A little bit drawn out in the middle of the book but they do get there in the end)

Pacing: 5/10 (could have been tightened up in the middle of the story)

Overall 7/10 (well written if you enjoy angst, would recommend if that’s your thing)