Back before I started the blog, a sweet writer messaged me on Facebook and asked if I reviewed M/M books and if I'd like an ARC of his third book, Heart, Tales of The Circle Book 3.  I then found out that the first two books were already out on KU and demolished them before agreeing to read the third book because I was so curious.. and now, Tim is back to tease you with an excerpt of Heart which should lure you to finding all three books in The Tales of The Circle Series... 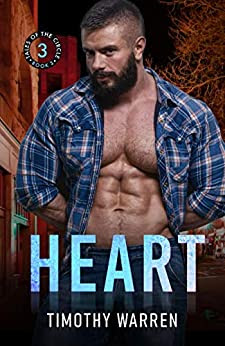 Chef, George Patras, is embracing life again. It’s been two years since David’s death and to honor him he’s opening a restaurant in his name.

Michelangelo Napolitano is a sweet bear of a guy, known in Dupont Circle as the singing mailman. He’s cute, funny, bold, impulsive, and light on his feet—one of which is often in his mouth.

George’s restaurant is on Mikey’s route. They see each other daily, yet date the wrong people. Will they ever see they’re perfect for each other?

There’s more Circle magic in this romantic comedy of blind dates, new love, and a whole lot of HEART.

Heart: Tales of the Circle Book 3, is a romantic comedy set in the gayborhood of Dupont Circle, in Washington, DC. It features characters from prior novels in the series that may enhance your enjoyment, but can easily be read as a standalone.

George was in the kitchen for no more than twenty minutes when he heard something out front that surprised him. He shouldn’t have been surprised—from what he knew it made perfect sense—he just wasn’t expecting it. The sound reached out for him like a large invisible hand, pulling him away from Zac and the dishes in the sink toward the door.
It was singing.
He was seduced, drifting out of the kitchen languidly, still wearing an apron and towel-drying a plate. The room had emptied, for the most part, the only people left were Jack and Demarco’s party in the back and Ned and Fabio’s table closer. But Mikey wasn’t with them now. He was standing in the corner with Gianni singing O Sole Mio, the rich and reedy tone of the accordion a perfect accompaniment to Mikey’s strong, yet tender, vocal.
Everyone in the restaurant had eyes on Mikey, also captured by his spell. But the pull for George was strongest of all… as if the ghosts of Mediterranean ancestors were escorting him in a dream, pointing bony, translucent fingers at the singing man and saying this—this is what matters. Forget everything else and listen to this heart sing.
He knew nothing of opera, only a peripheral appreciation—recognition of the greatest hits, so to speak. But there had been a few times in his life when he had felt the profound presence of grace—graduating, meeting David, sailing the Aegean… If he had to describe it from a culinary perspective, it was like reducing a liquid to its perfect essence—too little was weak, and too much was overpowering. But find that balance and it was nothing short of sublime
.
Mikey’s voice with Gianni’s accordion was that balance.
The music was now ascending, as were Mikey’s notes, lifting with the subtle power of Pavarotti. Only Mikey was much more handsome than the famed tenor—a beauty that George had never fully weighed. He was a large man, thick and beefy, but he carried himself with the grace of a dancer, strong and nimble. His bearded, cherub face could go either way—childlike and innocent, or mischievous and wise. But ever-present and undeniable was a sweetness that George was fast growing attached to.
Author's Bio:
Timothy Warren lives in the Atlanta suburbs with his husband and their pets. When he is not writing, he is writing in his head... which often leads to strange looks from his spouse.
He loves writing about things that make him smile--the chemistry between men, in particular. Sex plays a big part in these relations, but love wins out more so with his enjoyment of telling these stories... as in life.
"I like to write about men being men and falling in love with men. And I love a happy ending."
#ThrowbackThursday