Do you need a book that will tear you apart and put you back together, only to leave you wanting more?  Miki J suggests you try The Dead Don't Lie by Anne Russo to get your fix. 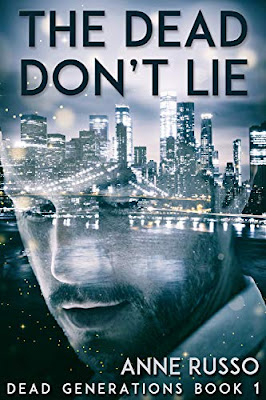 While young doctor Adam Morrow resigns himself to an uninformed existence, world-weary assassin Ian Abbott struggles with a life he never asked for. When the two strangers meet by chance, the attraction is immediate. And deadly, as Adam walks in on Ian in the middle of a hit.
The situation spirals out of control once Ian discovers he and Adam share a connection far more profound than either imagined. Shocked by the discovery, Ian makes the hasty decision to kidnap him.
Overnight Adam is torn from his promising career and a family who believes him dead. Things go from bad to worse when he finds himself reunited with a mother he never knew who is now head of a covert and shadowy group of killers for hire. Forced into joining their ranks, with Ian as his reluctant trainer and handler, Adam is given a series of impossible tasks to complete.
To survive, he must fight with everything he has to keep his life, his sanity, and his very soul from being swept up in a violent and chaotic world even as he battles his unwanted and complicated feelings for Ian.
For his part Ian, a man with dark secrets of his own, has a past he isn't ready to share with Adam even as the other man worms into his life in more ways than one. The two grow closer and lines blur -- between good and evil, friend or foe, enemy or lover. But something, or someone, plots against them, determined to do everything in their power to keep them apart. Even if it means destroying them both.
NOTE: This story contains a brief scene of sexual assault. This is book 1 in a series and ends on a cliffhanger.
Miki J's Review:

Wow.....The Dead Don't Lie is intense !! It's a rollercoaster of emotions and situations, it's heart-wrenching and the twists to the story - OMG !! I couldn't put it down......and ends on such a cliffhanger....don't let that deter you - you'll miss out on an awesome book !!!