Tempt Me by AT Brennan

Three of us read Tempt Me by AT Brennan, two who follow the series and one AT Brennan virgin... the good news is that the book met or exceeded all of our expectations and we all give it 5 Stars! 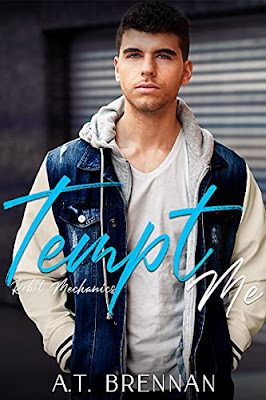 After a life of hiding, can I find the courage to be myself?
Being single, an introvert, and closeted has made my life lonely. The only bright parts are my coworkers at Rebel Mechanics and my volunteer work with a cat rescue.
In a moment of desperation, I sign up for a dating app, hoping to finally make a connection with someone. Despite me not exactly having stellar social skills, I find myself opening up to a virtual stranger in ways I never have before. What is happening here?
Then a new guy is hired at the garage, Jude. He’s funny, outgoing, and a genuinely nice person. He looks past my shyness and awkwardness, and for reasons I can’t understand, he wants to be friends. It feels like there’s something between us, but that can’t be. He’s straight, and to the outside world, so am I.
Then there’s SinBin7, the guy I’ve been chatting with online. He makes me want to take chances. To share all of myself with him, even though we’ve never met or seen each other’s faces. He feels familiar, like we’ve known each other forever. But then again, so does Jude.
How can I be drawn to two men at the same time? And more importantly: how do I choose?
Tempt Me is a steamy 89k word, grumpy/sunshine, hurt/comfort story featuring coworkers who start as friends, a found family, some scene-stealing cats, and all the feels. It is book four in the Rebel Mechanics series but can be read as a standalone.

I have been waiting throughout the Rebel Mechanics series for Wesley to get his HEA and I love that he's paired with the more outgoing and braver Jude.  This book definitely builds towards the getting together - anonymous online chatting becomes sexting becomes ghosting before they see each other at a club... Neither man is out publicly and this causes some tension and angst, as does some on page homophobia.

I love how AT Brennan develops the characters and interweaves them into the Rebel Mechanics world with the side characters, many of whom have found their HEA in the series.  It can be read standalone as the other characters backstories are only mildly reflected in the book and you can easily glean what you need from the text clues about them.

Tempt Me is well written. flows beautifully and was one that I read start to finish without really putting it down.   If you are looking for a book that has sweet, steam, out for you men than pick up Tempt Me today!

Sarah C's Review
This is my first AT Brennan novel, one I picked solely because the blurb sounded really interesting. I am glad that I did, because this book absolutely delighted me.
Tempt Me is the story of introverted and slightly socially awkward Wesley and his more outgoing and far friendlier new coworker, Jude. Both men are in the closet for their own reasons, despite the fact that they work in a very queer friendly space. When Jude comes to work at Rebel Mechanics, he catches Wes's eye immediately. Wes catches Jude's eye as well. Both men handle this differently. For Wes, he throws up walls and has a hard time letting Jude in. Jude, on the other hand, tries to strike up conversations and develop a friendship.
Meanwhile, they are both talking online anonymously on an app called Chatz, where they don't realize its the other that they're talking to, leading to some hilarious internal monologue as they both anguish over the fact that they have feelings for two different men. Luckily, this is a plot thread that gets cleared up before anything real begins between them offline.
I think my favorite thing about this book was the depth that Brennan put into the characters of Wesley and Jude. It was clear where both of these men were coming from, their reasons for staying in the closet, and the individual traumas they bring to the table. Not only does Brennan make these things clear, but the issues are handled with a lot of care. None of it feels superfluous or something put into the character's history for spice. Instead, the issues all feel very real and explain parts of their personalities. The side characters, whether they were characters from previous books or characters created to add depth to our leads, were well written. Several of them seemed, at first, to exist solely as a hurdle or misunderstanding between the two men but, the moment given a chance, surprised me quite a lot.
I will say that a good portion of the issues in this book, at least at first, could've been solved with actual communication and conversations. I was very glad when those started happening, especially as these conversations started a good trend of communication between the characters.
In all, Tempt Me had some angst in it, a good amount of steam, and a couple you wanted to root for. The chemistry was tangible and the relationship felt real, like there was more there than just a physical attraction. The emotional connection was evident between these characters and it sated me.
Reds Book Reads Review:
This is the fourth book in the series but can be read as a standalone book. It was nice however to have mention of the other characters from the previous books. I inhaled this book and couldn’t put it down!
I absolutely adored this book and read it in one sitting. Wes and Jude might be my favourites so far in this series. Both are still in the closet and hiding their sexuality from their friends and family. I loved how they met anonymously on a chatting app rather than the usual hook-up apps that you find and I felt that was a great way to find out about the background for the characters and the reasons they felt they had to hide their sexuality.
On the whole Tempt Me was an amazing book and I loved returning to Rebel Mechanics!
5 Stars angst ARC Contemporary Heather Hurt/Comfort Reds Book Reads Sarah C Series steamy sweet