#TeaserTuesday Exclusive Excerpt from Never Fade Away by E.L. Esch

I couldn't wait until next week to share this exclusive excerpt of Never Fade Away by E.L. Esch which releases on October 20th, 2021!  Not only is the book amazing, but the excerpt they shared will give you great insight into the story! 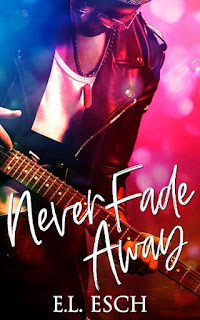 Until death does us part, but it's knocking on our door…
I'd had enough. That's how I found myself in a dingy alleyway with my revolver in my hand. I was sick and dying anyway, and there was nothing I could do about it. Nothing except maybe taking back some shred of control by going out on my own terms.

Surrounded by the darkness of my own mind, this was the only solution I could see, but before I could do something I’d regret, rock star Anno Goodkind crashed into my life and flipped it upside down.

It was supposed to be one casual hookup. No complications and definitely no feelings. No, the most logical thing to do would be to stuff my emotions down so nobody got hurt. Especially not him. But nobody told me that love didn’t give a damn about logic.

CONTENT WARNING: This story has a HEA but deals with heavy themes of illness, suicide, anxiety, and depression. Reader discretion is advised.

I’m a huge gamer, a lover of books and art, and have a fascination for lizards and other small critters that borders on an obsession. Which is probably why I already own 3 and have to actively stop myself from getting more.

I began writing because I always loved the idea that words can create entire universes and characters from nothing but a blank page and an idea. Like one day you have an empty Word document and then in as little as a few minutes—boom! You just created a snarky art school graduate with purple hair whose blood may actually be 90% coffee.

I write Male/Male adult romance. My books usually focus on realistic life topics—stuff everyday people go through and struggle with. I like when we as readers can feel connected to the characters we’re reading about. When we can understand their feelings and then suddenly they become truly human.

I’d thought Lyra was kidding, that there was no way such a travesty as what I laid my eyes upon now existed. The delicious sanctity of pizza was ruined. Anno had taken it, beaten it to death, resurrected it, and then incinerated it to ash. Even the sight of the pineapple and ham atop his two pizza slices was enough to amplify the pangs of pain in my stomach.

“What are you?” I shook my head as Anno sat across from me at a table at Wally’s. “You’re not human; I can assure you of that.”

Anno narrowed his eyes. Slowly he took a bite of pizza, never taking his gaze off me. “Mm.” He exaggerated a moan.

Ugh, I couldn’t even watch.

He swallowed dramatically. “At least I'm not a basic pizza bitch.” He gestured at my slice of pepperoni and cheese.

“Nothing you say has any credibility after you just shoved that in your mouth.”

“Pineapple’s good for you. Makes your ejaculate sweet.” He picked a piece of pineapple off his pizza and flicked it at me.

Feeling bold, I found where it had landed on my plate and slipped it leisurely into my mouth. Immediate regret filled me and I cringed. So stringy…

Anno called out my failed attempt at seduction without mercy. “Real sexy.”

“I try.” I washed the taste out with the bottle of water I’d ordered with my food. “You know you can probably take those off.” I motioned to the aviator sunglasses resting on Anno’s face. “Place is dead.”

Wally’s was a small restaurant with only a handful of tables. Other than us, only a group of teenagers were seated. People had been coming in fairly frequently for takeout orders, which were the majority of the pizzeria’s customers, but none had taken any notice of us.

Anno removed his glasses and hooked them over the neckline of his shirt. “You just want to see my pretty eyes.”

That hadn’t been my intention, but it was certainly a bonus. I shrugged. “Sue me.”

We sat in silence for a while as Anno chowed down on the monstrosity that he’d ordered. I refused to call it food. He finished his first slice rather quickly while I barely nibbled mine.

“I hope you didn’t invite me out for food just because my stupid stomach couldn’t keep quiet.” Anno gestured at my full plate.

“Nah.” I rubbed the back of my neck, looking for any excuse that wasn’t the truth. Then I remembered what Anno had said earlier when I’d tried to hide feeling unwell from him—“I’ll understand”—and decided lying wasn’t worth the effort. “I was also hungry, and when we left the house I felt able to eat. Now my body doesn’t want to cooperate.”

“I can take my food to go.” Anno moved to stand.

“I’m okay. I go through phases where I’m put off food all the time. It’s fine.”

Anno settled back down in his seat. He folded his hands on the table and began tapping a nail on the chipped plastic cover. His lips were drawn in a tight line. “Can I ask you something personal?”

“Shoot.” Sure, I could sound confident, but inside my heart had started beating like a jackhammer.

Now Anno was tapping with all the fingers on his right hand. “What do you have?”

Oh. My heartbeat settled. That was an easy one.

“And…” He paused and stopped tapping. “How long do you have left?”

Less easy. I leaned back in my seat and clicked my tongue. “Five years, supposedly. If I’m lucky.”

Anno’s face went blank for the briefest of moments before his expression morphed all at once. His eyebrows arched up; his lips parted as if in an unspoken sigh. Something like sadness glimmered in his dark eyes, but it wasn’t quite sadness. It felt stronger, more potent. Whatever emotion he was feeling, sadness was the diet version.

“You’re telling me.” I couldn’t look him in the eye anymore and shifted my gaze to the table.

I laughed. “Not really.” Ever since the diagnosis, I’d become complacent with most things. Things just happened now. Some made me happier than others, but nothing truly excited me anymore. I felt like life was being lived for me in hushed automation, and I was simply along for the ride. Except the night I’d met Anno. That was the first time I’d felt fire in my blood in a long time, like I actually wanted to take the wheel of my life and be an active participant instead of a quiet bystander.

“Come on,” Anno pressed. He reached across the table and grabbed my hand with such gusto that I started. The sorrowful expression he’d worn a moment ago was gone, replaced by an almost childlike excitement. “There has to be something you’ve always wanted to do. Everyone has something.”

“Even a famous rock star like you?” I hadn't expected there to be an answer, so when Anno took his hand from mine, leaned back in his seat, and nodded, my curiosity was piqued.

“I love rock, obviously. ’S in my blood. But sometimes it all gets so… boring. Fuck the establishment, tune in, turn on, drop dead, slaves to a wage, yada yada. I mean, I work for a label for fuck’s sake. I’m working for the man, same as everyone else.” A spark flared in Anno’s eyes. “Sometimes I want to write something else. Who’s to say I couldn’t write, say, a love song or something?” Passion rang in his voice as he went on about all the ideas he’d try if he felt like he wasn’t stuck, if certain qualities weren’t expected of him and his music.

I hung on every word, transfixed. I knew to be a musician you had to love music, but I was witnessing that love in real time. I was seeing Anno in his rawest form, completely exposed as he bared that love to my opinions and judgment.

“Rock comes natural to me because of my time with Artificial Sun, but sometimes I feel like I need to move on from that. Like my music makes me feel stuck in the past, surrounded by shadows of Martin, of the old band, everything that used to be. So yeah, if I had to pick one thing I’d want to do before I died, it’d be to break that mold.”

Only when he stopped talking did I realize I’d forgotten to breathe, afraid to interrupt him with even the soft roll of my breath. I sucked in a quiet lungful of air and exhaled. My heartbeat quickened again. Something lit inside me, like my body was an abandoned home and the power had been flipped on for the first time in ages. My nerves sparked, and my entire body felt the urge to move. It was the same sensation I’d felt the night Anno kissed me at the lake. Excitement. Excitement for Anno.

“Fuck yeah.” Anno slapped the table. “So come on, you have to have something like that too.”

I searched my soul long and hard. Something I’d want to do over anything else… Warmth prickled along the back of my neck. “It’s not something as grandiose as revolutionizing my music.”

And add to your TBR list on Goodreads: https://www.goodreads.com/book/show/58841499-never-fade-away 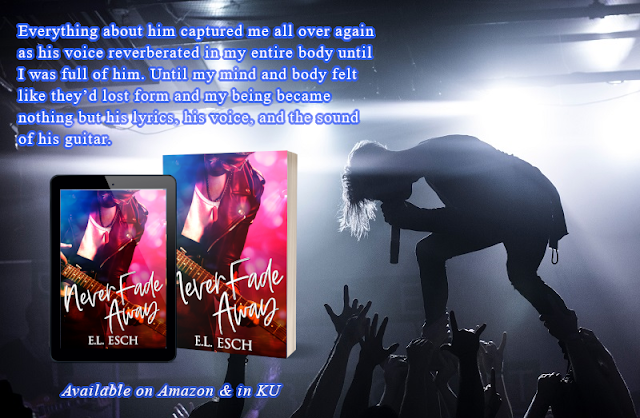