You'd never expect Kellen and Arsen to get together based on their first encounters, especially if Quinn had anything to say about it... 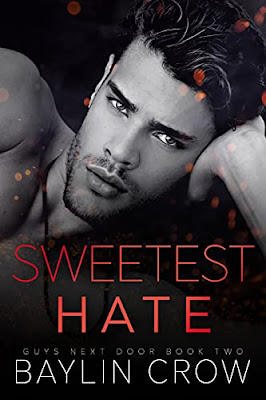 Kellan—Messing around with Arsen is like playing with fire and I can't help but crave the burn.
The day I met my best friend's new stepbrother I fell into hate with the moody jerk. The feeling is mutual. I loathe him and unfortunately want him in equal measures. At least he seems to be suffering the same undeniable pull. He infuriates me. He's crawled under my skin.
Arsen has the ability to ruin me for anyone else, and I want to let him.
A mix-up during a trip to the lake puts us in an inconvenient situation where we end up sharing a room. Worse, once we get home, I'm left unable to escape him. He's right next door and impossible to ignore.
As we spend time together, I'm forced to realize there's so much more to him than I expected. I thought I had feelings for my best friend, but Arsen has me questioning everything I know about love.
It's the sweetest hate, or maybe it's something else entirely.
Sweetest Hate is the second book in the Guys Next Door series and can be read as a standalone. It's about two guys who may not hate each other as much as they thought. Maybe it's the opposite. Maybe they can teach each other exactly how to love.
Heather's Review:
Once again, Baylin Crow hit a homerun.  The attraction/hate/want/guilt relationship that begins the book is perfectly written and conveys just enough angst and inner thoughts, without being whiney... the pace of the story is good, although I would have liked  just a little more sweetness between the crisis and the I love yous... but since she set the table so well, the characters really did have to step into their HEA.
Sweetest Hate brings the right mix of sweet, heat and timing to pull you into the story and keep you there from beginning to end.  Baylin Crow's ability to share details of place and character mean that you can easily become a fly on the wall and sink directly into Kellan and Arsen's world.. and that's why if you like a good new adult story, you should pick this one up and add it to your TBR!  It can be read standalone, however you may want to pick up Stripped Love and add it to your TBR too!
5 Stars Enemies to Lovers Heather KU New Adult Series steamy sweet