Sea of Love by Nic Starr

The Sea of Love is based on a cruise ship game show concept and I saw so much potential in this book... but it missed a few ports for me... 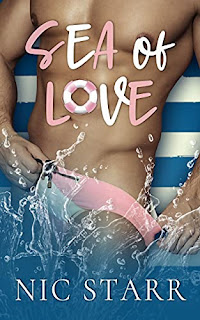 The cruise of a lifetime. A reality TV show about romance. Falling in love is inevitable.
Evan Williams is the type of guy to stick by his friends, especially when they’ve been hurt and need a favour. And if that favour involves the cruise of a lifetime, then how can he say no? Even when it means pretending to be a devoted boyfriend to Amber and having their fake relationship play out on a reality TV show for all the world to see.
Realising his boyfriend is a conceited jerk and dumping him doesn’t stop Harry Bishop from winding up as one half of a supposedly loved-up couple on the Sea of Love TV show. And if that’s not bad enough, he’s faced with temptation in the form of Evan, the perfect blend of boy-next-door-meets-sexy-stud he once crushed on. It’s going to be a long two weeks.
Two weeks of competitions, challenges, and confrontations. They’re here to take out the Sea of Love title—just not with each other—and there can only be one winner. But it turns out that true love isn’t about winning a contest; the real prize comes when you follow your heart.
Sea of Love is a feel-good romance featuring hidden attraction, fake relationships, and friends-to-lovers.
Heather:
I had such high hopes for this book - the premise seemed new and fresh and I could see the potential for a little bit of will they/won't they angst, but the lead up to the romance took up 80% of the book and by the time that Harry and Evan got together the romance only had two chapters left to go...  I thought both Harry and Evan were adorable characters that could have explored so much more with each other than they got to in the book.
I gave this book 3.5 stars because it really was a cute story with potential... if the cruise had only been a week long and they made it to day 4 of the cruise and the contest by the first half of the book, you could have really gotten to know Harry and Evan as a couple and developed a solid romance storyline that would have made the HEA all that much sweeter...
The author's writing style was engaging and I would definitely try another book of theirs in the future...
Rating: 3.5 Stars
Laora's Review:
"Surely Harry needed to know about John? And if he did, he could make up his own mind about how to handle it "
I really enjoyed the staging of this book on a cruise ship for a Trans Pacific trip. For those of you who have been, some of the settings mentioned by the author are so familiar. The idea of a reality based show on a ship was a laugh, because you can't get of 😁. I enjoyed the concept of sticking up for your best friend as Evan  did for Amber. I had more trouble understanding why Harry felt he needed to join John, since that character seemed so manipulative and self absorbed . However it was great to read how Evan and Harry, who knew each other from work  start to get together, but still having to play the couple's game. I recommend this book to all who like a light read with a hfn/hea ending.
Rating: 4 Stars
3.5 stars Contemporary Heather Laora